OCG in the Lab: Seafloor Geology 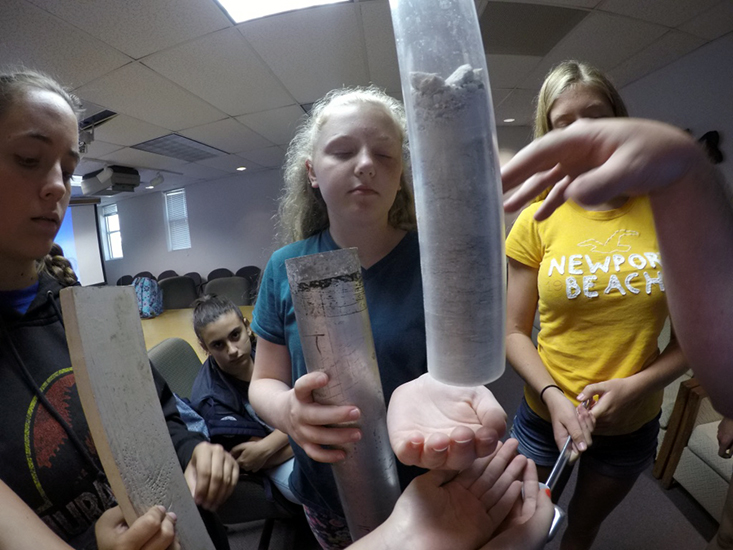 Looking at the grain sizes within a core.

The Seafloor Geology lab took the girls back in time to 4.6 billion years ago, when the Earth began, to the future where the effects of climate change are realized. The lab started with a crash course in geologic history, where the girls learned about significant geological events from the formation of the Earth, to the Age of the Dinosaurs, to the beginning of human history, to now. After learning about the Geologic Time Scale, they used a tape measure (4.6 meters) to model the 4.6 billion years of earth history, and where some of the important events in the geologic past fall relative to each other when put to scale. What they found was that most of what we know about Earth is from a very small amount of geologic time when looking at the beginning of the Earth until now (within the top few centimeters!).

After the Geologic Time Scale activity, the girls were introduced to some of the ways in which geologists retrieve seafloor sediments to understand the Earth’s past. They learned about different sediment core devices, what scientists hope to gain from coring the seafloor, and what the role of sedimentologist is on a research cruise. Following that, we had a tour of the PaleoLab, which uses multi-proxy analyses of sediment cores, from those collected in Antarctica to those collected in the Gulf of Mexico to understand the 2010 Deepwater Horizon oil spill. While in the PaleoLab, we looked at a sediment core recently collected in the Gulf of Mexico. The girls used their new knowledge of sedimentology to discuss what we could learn about the Gulf of Mexico just from looking at a sediment core. We also had the opportunity to visit the core storage freezers (the girls were in and out quickly to avoid the cold!)

Next, we visited the Reef Indicators lab for a crash course in microfossils, including observation of a reef sediment core record under the microscope and comparison to a live sediment sample, which includes living individuals of the critters that contribute to the sediment record.

On day 2, we began by talking about the environmental processes that can produce different sizes and shapes of sediment grains, how sediments are deposited in the ocean, and how sediment is sorted once it makes it there. We then talk about how this would affect what we see in sediment cores in different locations in the Gulf of Mexico, and how you can interpret the environment using these cores. 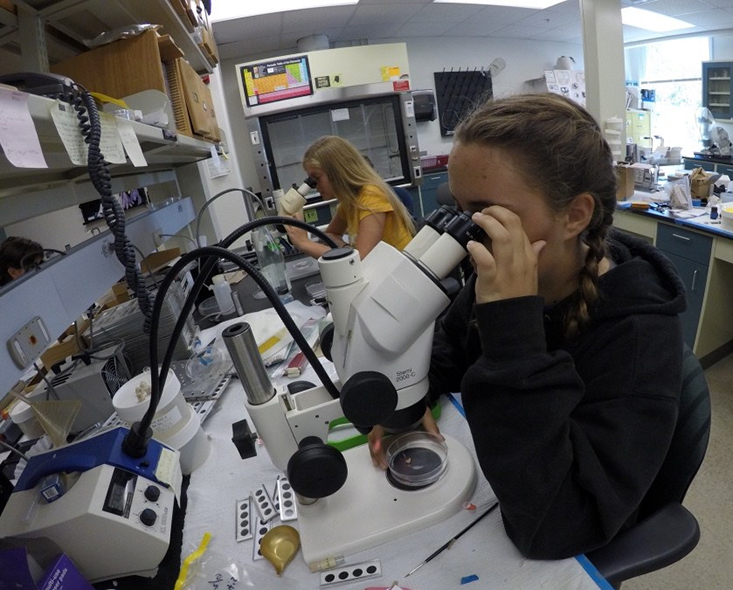 Looking at microfossils underneath a scope.

After that we talked about a more complex environment, Antarctica. The girls learned about the differences between glaciers, sea ice and icebergs, the effects of different ice types on the sediment deposited on the seafloor, and how these different ice regimes affect regional and global sea level. For the final activity of the lab, the girls sketched out a sediment core representation based on a series of actual events recorded in Antarctic sediment cores. The purpose of this activity was for the girls to use their new knowledge of sediment grain size, shape and sorting to depict what a sediment core taken in a specific location with changing ice conditions would look like. The girls then use candy to create a key for the different grain types and create their own core, working backwards from the events provided. We ended the lab discussing what would happen if Antarctica were to melt under current global warming projections, and the effect of rising sea levels both in Florida and internationally. Both groups really enjoyed the lab, and they promised us it wasn’t just because of the candy!