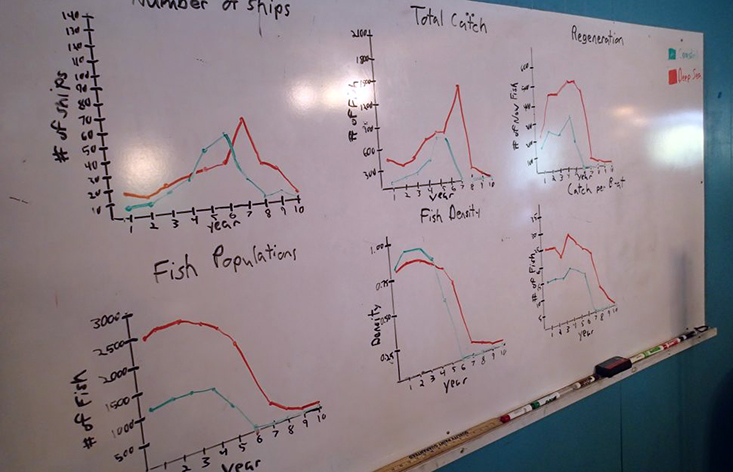 This post was contributed by Kelly Vasbinder, science mentor and College of Marine Science graduate student.

The second to last day of camp is the day of the Fish Banks game, or as I like to call it, the “Best Day of Camp”!  As a fisheries and ecosystems ecology graduate student, I can trace my first interest in fisheries science all the way back to doing Fish Banks as an OCG camper way back in the day! Fish Banks is a monopoly-style game that simulates the actions and consequences involved in running and managing fisheries.

Fish Banks is a computer simulated fishery that the campers interact with by making decisions about where to place their fishing vessels.  The day started as Director Teresa entered the room in full fishing gear and announces that teams of campers will be running their own commercial fishing operations! The teams must each choose a name and design a logo to represent themselves.   After a short introduction to the game, the teams decorated five fishing vessels and decided whether they want to fish out in the deep, fish near the coast, or leave their boats in the harbor to save some cash.  The girls placed their vessels on a game board with the Game Board Operator and then they handed in a decisions sheet to the Game Operator who input their decisions into the simulation.  Each fish caught returns a profit but the girls also have to factor in the operating costs of their fishing vessels to decide whether it will be worth sending their vessels out.  The computer simulation then fished in the areas that the campers chose and returned their profit for the year as well as the fish population size that was left after fishing!  The simulation game runs for 10 years, and information about the fishery is plotted on the board to help the campers make their decisions.  Campers got to see how the population size, regeneration, total catch, vessel numbers, catch per vessel, and fish density changed from year to year. Some teams chose a conservation approach, considering the health of the fish population in making their decisions on where to fish.  Other teams took an economic approach and made their fishing decisions to maximize their profits. 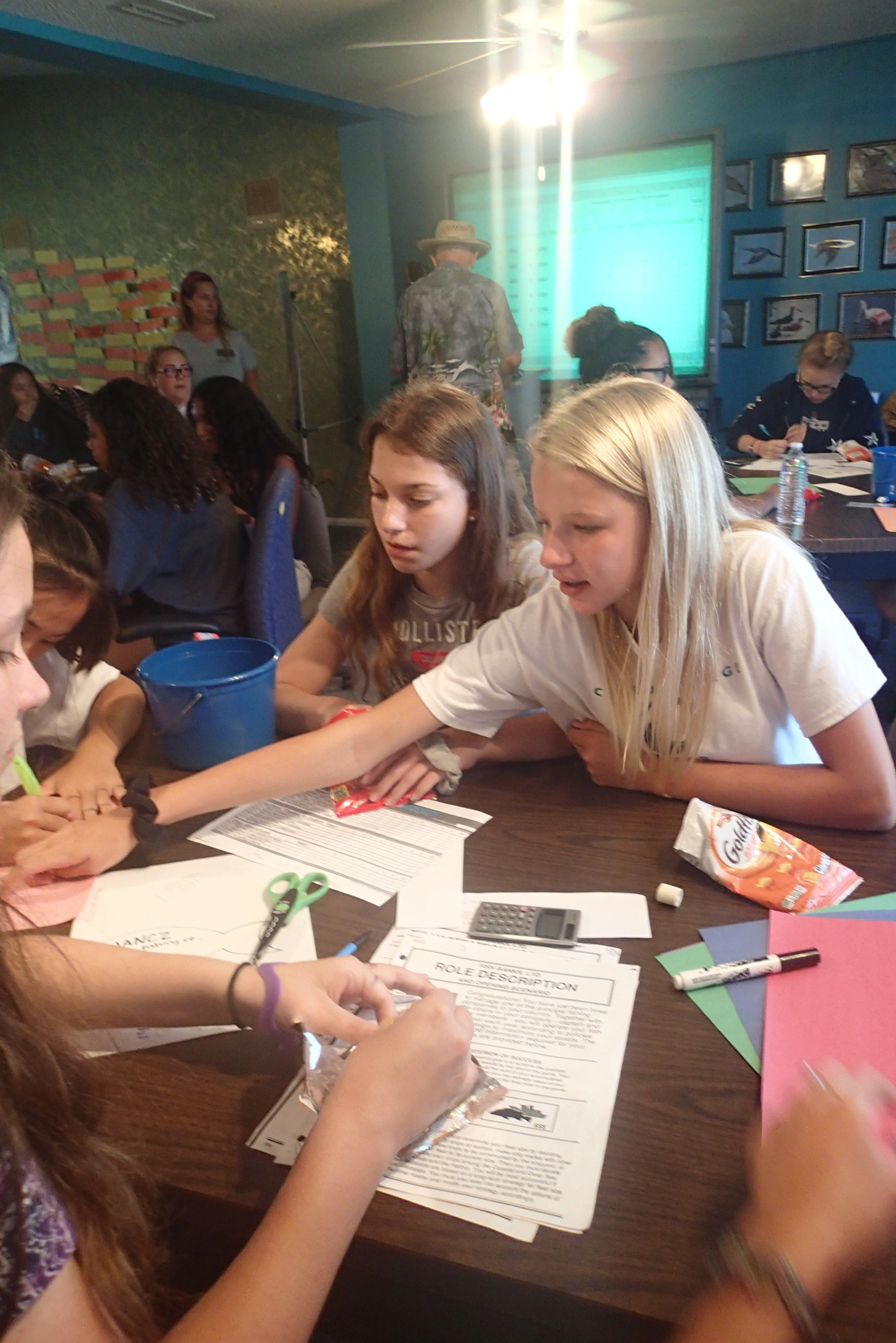 But Fish Banks isn’t all numbers and decisions! Our Creative Director led the girls in some fun art activities to represent their fishing companies.  After designing a logo for the name of their company, teams wrote radio jingles to advertise their fish!  In between rounds of decision making campers also created television commercials and wrote creative letters home to their pretend fishing company families about how the fishing operation was performing.   The girls had a blast inventing skits, songs, and stories about their fishing companies to share in front of the camp!

Around year 6 of the 10 year simulation, the campers started to notice something ominous on the population plots: the fish population was crashing! They were catching too many fish to sustain the population!  As the population crashed to near extinction, the campers discussed what decisions they could make to save the fishery.  Some teams realized that only by banding together could they keep their fishing conglomerates from going under and implored other teams to reign in their fishing so that there would be enough fish left to go around!  As we closed out the day, we talked about the “Tragedy of the Commons” and how easy it is to exploit a shared resource.  Each team shared their strategy for decisions making.  The campers got to see how real fisheries behaved, and how some of their decisions mirrored actual decisions made for different fish populations.  Campers brainstormed about what we could have done differently to run a sustainable fishery and talked about how the U.S. manages fishing today.  We ended the day with a team work activity and decided that when sharing a common resource, team work is the key!