Crap! That’s a lot of Curry! 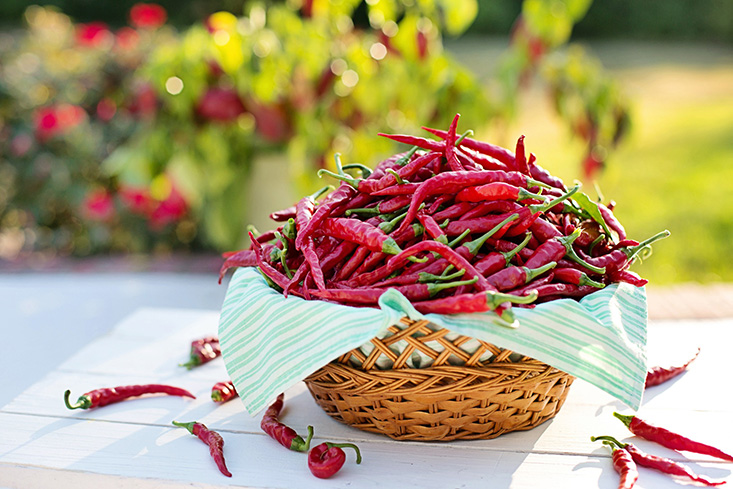 The most abundant virus in human feces is a pepper virus that eventually leaves our bodies after we’ve eaten peppers and pepper products, such as curries, hot sauces, and spices. Scientists at the USF College of Marine Science are excited about its potential to transform the way we monitor water quality.

ST. PETERSBURG, FL – A team at the USF College of Marine Science was startled to find that a plant-borne virus dominates the viral community in human feces – and it could be a boon to water quality monitoring around the globe.

It was more than a decade ago that Dr. Mya Breitbart, now a Professor at the USF College of Marine Science (CMS), had what may seem like a “crappy” job to do to those of us who aren’t rock star microbiologists. Her goal was to use a novel sampling and genetic sequencing method to find viruses in human fecal samples.

The gut is a veritable playground for microbiologists. Loaded with tens of trillions of bacteria and possibly ten-fold that number of viruses, the game was on to find new human gut viruses in the place we’d rather not think about.

Dr. Erin Symonds, the brave lead author of the summary paper in PLOS Pathogens Pearls, is willing to look where few would venture in order to protect public health. Photo Credit: Mya Breitbart.

What she found in the samples surprised her. In fact, “It was a total shock,” said Breitbart, who was expecting to find viruses that infect humans and bacteria.

The most abundant virus of all was a plant virus called the pepper mild mottle virus (PMMoV) that infects field-grown peppers. PMMoV ends up in our guts – and eventually comes out in the toilet – after we’ve eaten peppers and pepper products, such as curries, hot sauces, and spices.

“That’s the power of this tool,” said Breitbart, who helped pioneer a relatively new molecular diagnostic tool called viral metagenomics. “With it, we’re able to go into any environment for a sample and figure out exactly what viruses are there without any preconceived notions.” Usually, scientists use specific tests for viruses they already know are there.

“We never would have thought to look for plant viruses in human feces, but there it was,” she said.

Breitbart’s team has embarked on several other genetic hunting expeditions using this tool in seagrasses, zooplankton guts, and more – and the quest to better understand PMMoV has kept them particularly busy. She and two others from the USFCMS, Dr. Erin Symonds and Dr. Karyna Rosario, were recently invited to publish a review in PLOS Pathogens Pearls to bring more attention to the pepper in the poo.

Lame jokes aside, PMMoV has the potential to transform the way communities monitor water quality—important work because no one wants waste in the water.  Communities around the globe and here at home face several looming challenges from strong storms that can cause sewage overflows to aging pipes exiting our homes and in water treatment plants.

PMMoV’s dossier is loaded with reasons it’s a good pollution alert candidate. To understand them we first need to understand where current water monitoring protocols fail.

Current protocols are inexpensive, easy to do, and rely on fecal indicator bacteria (FIB) such as the famed E. coli, which are found in animal guts. They’re not ideal.

There is little if any correlation between the presence of FIB and the presence of actual human health pathogens, such as the spectrum of viruses that cause gastrointestinal distress. FIB can be found in the guts of other animals, and they can grow in environments like sediments. So even if FIB are detected at a nearby beach, the water may actually be safe for recreation. Another downside of FIB is that they are more easily removed from wastewater than viruses – so they might not be detected even if problematic viruses are present.

What’s more, there’s a time delay involved in FIB detection, which is currently done through growing the bacteria and can lead to ineffective decision-making about whether or not to close a beach, for example.

A potentially better way to monitor for fecal pollution could be to track down the specific viruses of interest, such as norovirus, but hundreds of different viruses are known to infect humans—and the tools available for such highly targeted tracking are expensive and unrealistic.

All this points to promise in the pepper virus. Since Breitbart’s team first proposed its potential for water quality monitoring in 2009, it’s been the subject of more than 25 water- and food-related microbial quality and technology studies.

This agricultural menace is not usually found in animals other than humans. “It is super stable and stays infectious while it goes through our bodies,” Breitbart said, and it is found in huge quantities so it’s easy to detect.

Close to 100 million genetic traces of the pepper virus are found in a single milliliter of hot sauce.

Breitbart’s team dreams of the day they can harness the power of the pepper virus to develop a kind of dipstick that people can use anywhere to test the water, whether visiting a popular beach or hiking alongside a river in a remote nook of the world. But there’s more work to be done.

This work was funded by the National Science Foundation. 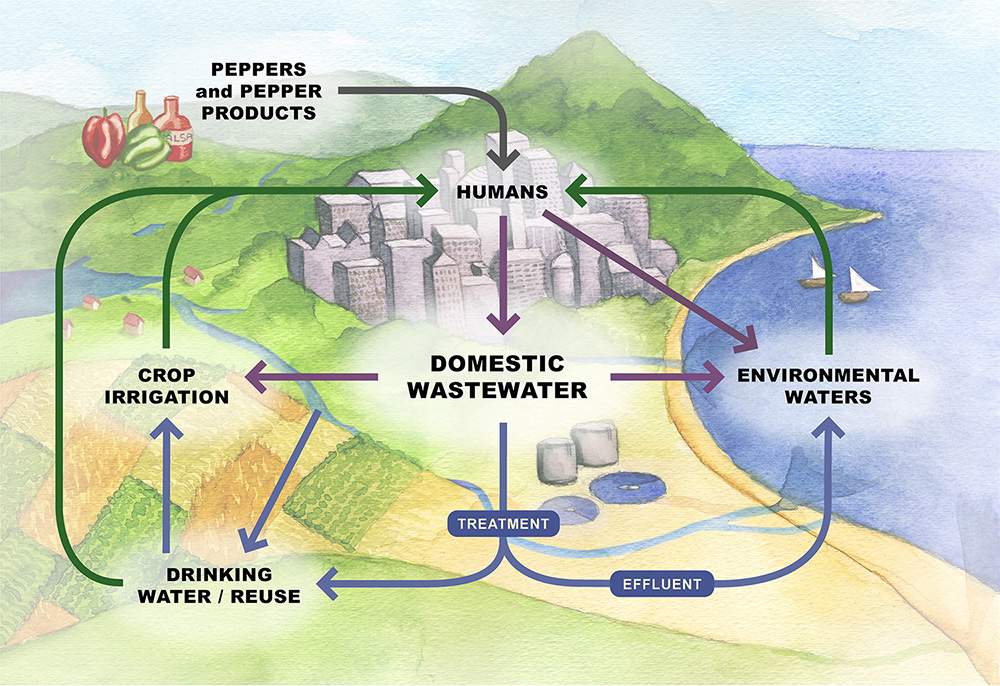 A schematic of the lifecycle of the pepper virus (PPMoV) found in human feces that could transform the way communities monitor water quality. Artwork by Anne Martin (hungrybraindesign.com).