The Ins and Outs of Fish 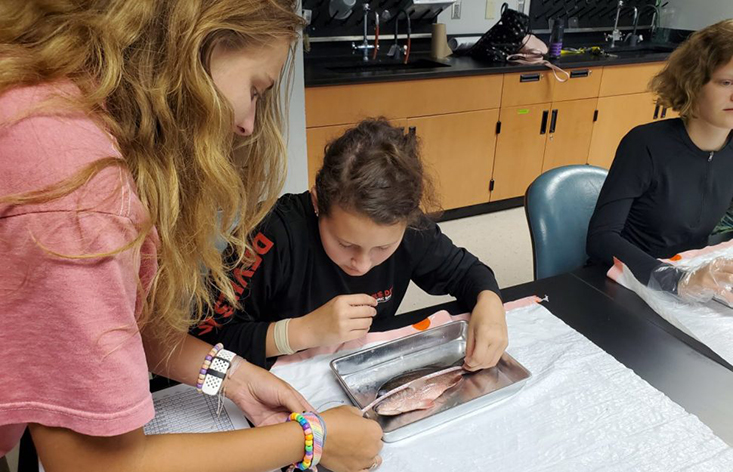 Campers examined several Spotted Seatrout and Spanish Mackerel carcasses with the goal of gaining insight into how these fish lived and their feeding patterns.

I’ve had the pleasure of leading the Fish Ecology Lab for four years now and every year is always an adventure. As both a fisherman and a scientist, this lab has always been very important to me because not only do we learn about fish and why they are important but also how to protect them for future generations to experience and enjoy.

The goal of the lab is pretty straight forward: To learn about fish and why they are important. Day 1 starts off with trying to answer the intuitively simple question “What is a fish?”. However, we quickly learn that trying to describe the most abundant and diverse group of vertebrates on the planet with over 30,000+ species isn’t quite so simple.

In order to help answer our question we quickly dove right into analyzing numerous different species local to Tampa Bay and the Gulf of Mexico.  Although it’s wise to never judge a book by its cover, I guarantee you’d be surprised at how much you can learn about fish just by observing their external features. By identifying different body types, fin shapes, and mouth position/tooth shape we can gain insight in how these species interact with each other and their environment.

After exploring what we could on the outside we decided to plunge straight on in and see what the insides could tell us. Campers examined several Spotted Seatrout and Spanish Mackerel carcasses with the goal of gaining insight into how these fish lived and their feeding patterns. The Mackerel with their streamline bodies built for speed on the open water were composed to a high percentage of red muscle for constant swimming and a reduced swim bladder while the Trout was better suited for life on the grass flats with predominately white muscle for ambushing prey and a large swim bladder for floatation and communication. This year we also had time to analyzed stomach contents for each fish and found some interesting results: The Mackerel had all been feeding primarily on shrimp while the trout both had small well-decomposed sardines and one had a whole blue crab in it!

At the end of Day 1 we wrap everything up with an activity called “Build-a-Fish” in which campers use their creativity and what they have learned to create their own fish species and share its Biology and Ecology with the group.  While some girls use their imagination to create colorful and “cute” fish, others use their god-like powers to create absolute monsters that even I wouldn’t even try to catch. And that’s definitely saying something. 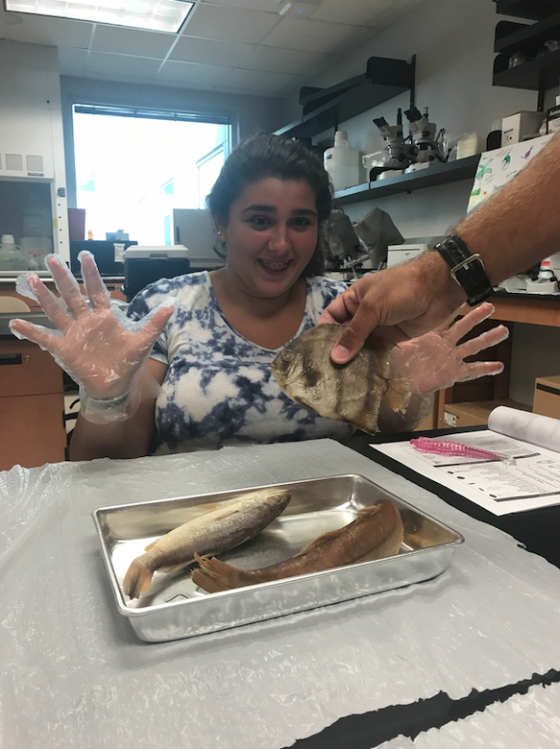 On Day 2 campers stepped up their game and became Fish Biologist themselves. After learning about what fisheries are and why it’s important to manage them, we broke out the measuring tapes and scales and continued the research I started nearly five years ago. We measured the length and weight of several Mangrove Snapper in order to see how the population is doing in 2019. On the last day of camp, we will analyze this data to see how/if the population of Snapper has changed over the years and why it’s important to monitor these potential changes to ensure that fish populations remain healthy.

We usually wrap up Day 2 with the crowd favorite of teaching the girls how to fillet a fish. Although this activity drives my blood pressure through the roof as I equip several 14 year old girls with a razor sharp 12in fillet knife (Rule #1 is always cut away from yourself, which of course happens to be exactly where I have to stand to guide them…), it neatly wraps up everything we learned since the final product of a fishery is the fillets we eat. Every year I’m blown away by how well the girls do, always putting all my fishing buddies to shame to say the least. And as an added bonus I have yet to get stabbed so that’s always a plus.