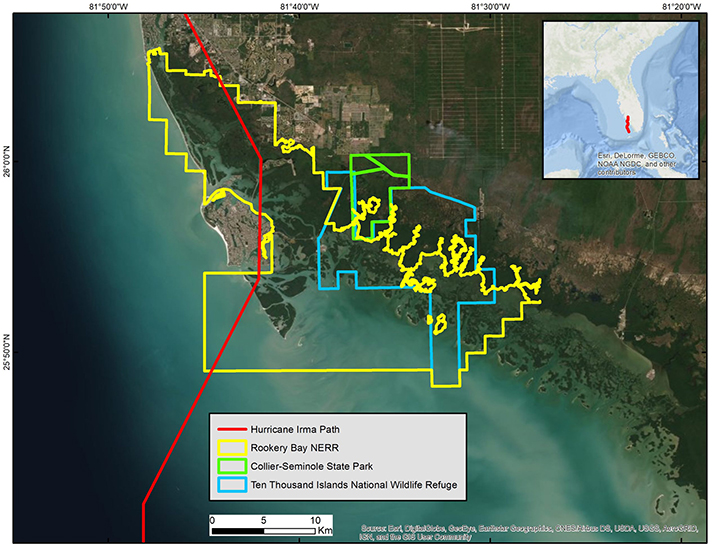 Southwest Florida, USA, showing the path of Hurricane Irma (red line in main graphic and in the inset showing the western Gulf of Mexico and the state of Florida; ArcGIS Basemap Source: ESRI). Local management jurisdiction boundaries are shown in different colors.

ST. PETERSBURG, FL – In September 2017 Hurricane Irma made the final of its seven landfalls in southwest Florida. The devastation to wetlands, homes, and livelihoods belied a sweet name like Irma. Many living in Marco Island, the largest of Florida’s Ten Thousand Islands and the bullseye for the final hit, still have blue patches on their roofs today – remnants of Irma’s 120 mph winds. 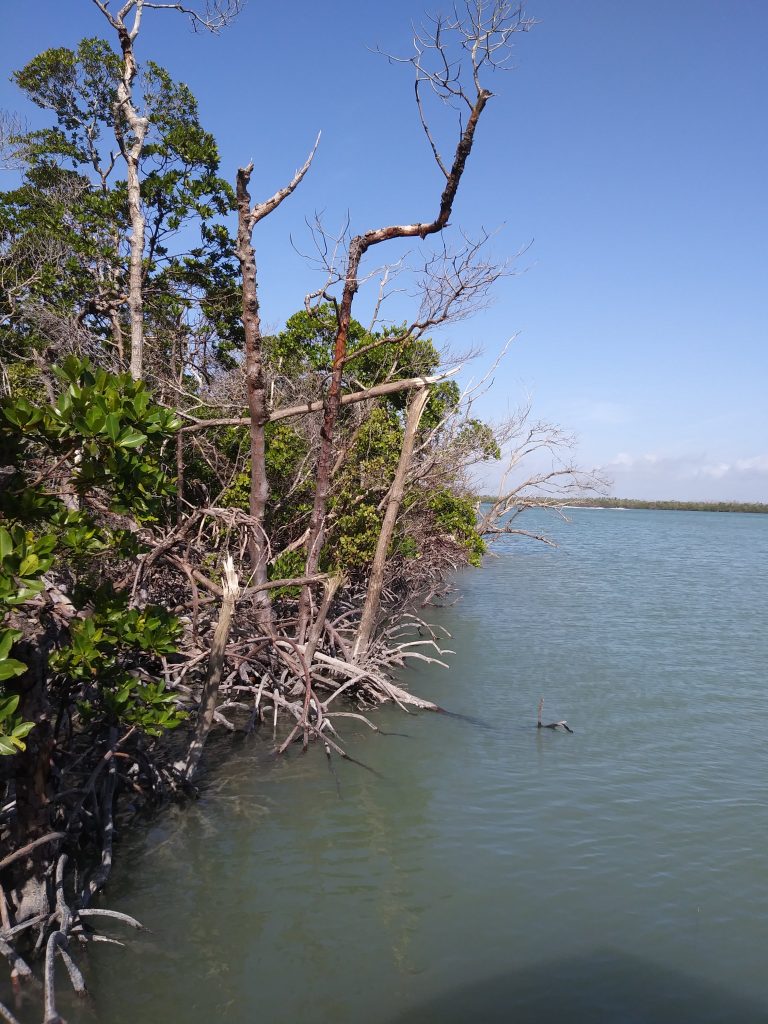 Photograph of broken and defoliated red mangroves from site visit in January 2019.

Satellite imagery has been one strong tool in the box for analyzing widespread, large-scale damage in the aftermath of natural disasters such as hurricanes. But analyzing such large volumes of data and verifying them with on-the-ground field surveys can be time-consuming and expensive.

A team led by the USF College of Marine Science came up with a better way, which they reported in the journal Remote Sensing. They used a supercomputer to fully automate the processing of 91 high-resolution commercial satellite images collected between 2010 and 2018 to develop maps used to assess Irma’s damage to mangrove forests along this southwest Florida’s coastline. The method, which included a way to remove glare from the sun – a pain point in the field of remote sensing — proved to be about 200 times faster than traditional methods. The results were verified in a three-month photo-based field survey conducted by Tatenda, Inc.

“The last habitat map for the area we studied was created in 2010 and took two years to complete,” said Dr. Matt McCarthy, the lead author of the study at USF and technical lead of the project. “We completed nine years of maps in four hours.” 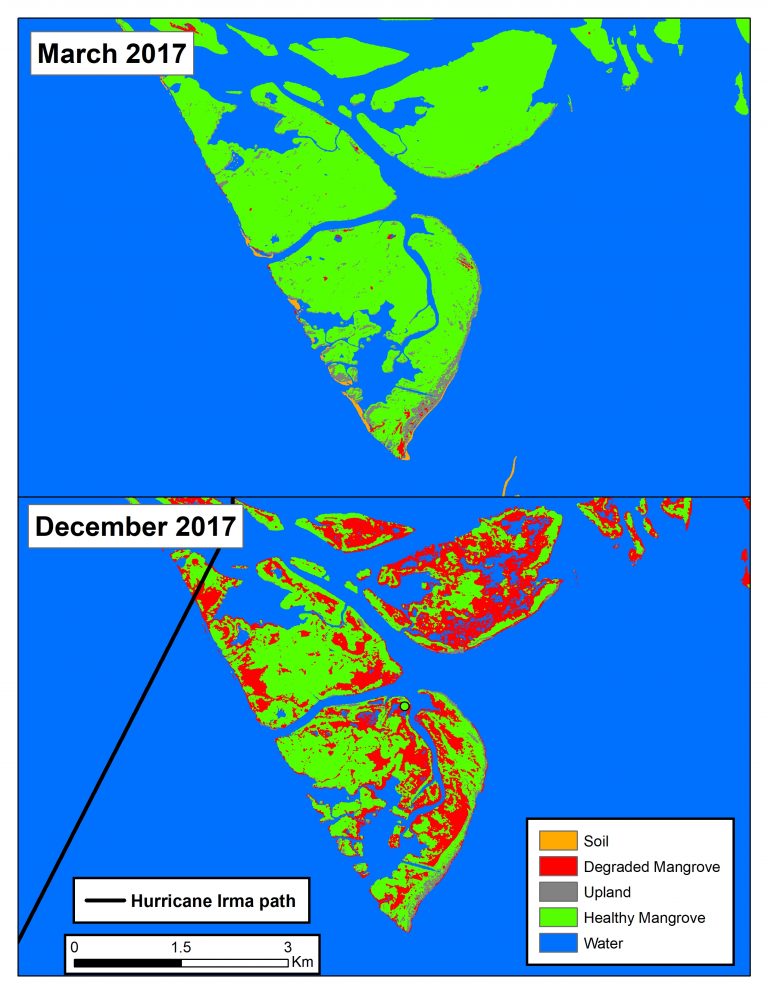 Damage to mangroves caused by Hurricane Irma in September 2017.

The high-resolution maps showed that about 17 percent of the mangroves were damaged by the hurricane in 2017. While about 35 percent of the damaged mangroves recovered throughout the following year, many others died.

“The commercial satellite data allows us to see individual trees and the pattern of damage from hurricanes,” McCarthy said. “This is an amazing tool we can use to support coastal management.”

“Without this partnership, these maps would have taken us more than ten years to develop,” said Brita Jessen, Research Coordinator for Rookery Bay National Estuarine Research Reserve. Her team needs updated maps to be able to efficiently monitor sensitive coastal ecosystems, assess them after storms, and plan for any necessary restoration efforts. 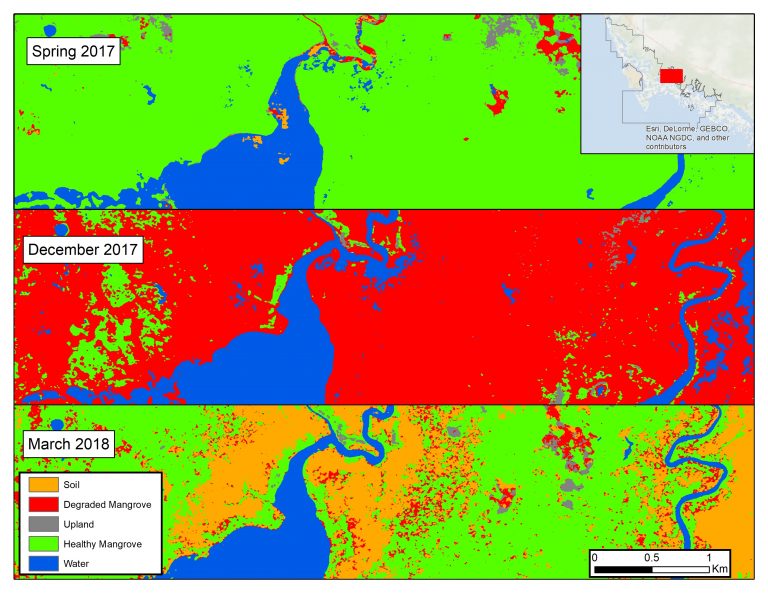 Subset of the study area (inset map) reflecting the various stages of mangrove change. Healthy mangroves dominate the reserve in early 2017 (top) but they were largely degraded after the hurricane (center), and either recovered or died by the spring of 2018 (bottom).

“The ability to see large areas quickly from space and make accurate maps frequently and repeatedly over time is a unique ability that NASA and NOAA space-based technologies have provided. The images from space are stunning, beautiful, and very useful,” saidFrank Muller-Karger, a professor at the University of South Florida and lead of the regional MBON program.