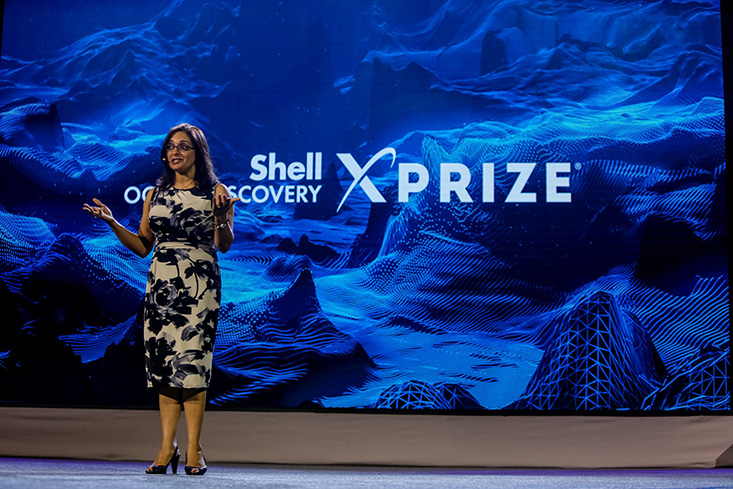 Dr. Jyotika Virmani presenting about the XPRIZE at Visioneering, 2016

Dr. Jyotika Virmani earned her PhD in physical oceanography from the USF CMS in 2005 under the tutelage of Dr. Bob Weisberg. In February 2020, on the cusp of the world changing in response to the COVID-19 pandemic, an exciting press announcement rippled its way through the ocean science community and ours here at CMS: The Schmidt Ocean Institute appointed Jyotika as its first Executive Director. We caught up with Jyotika, who was previously the Executive Director of the Shell Ocean Discovery XPRIZE that involved a full-on gaggle of CMS alums, to hear more about the dawn of her illustrious new career chapter. A key take-home message we can all learn from Jyotika? Keen communications skills, calm under pressure, and an ability to keep perspective are critical to success in one’s career – but topping the list is to never, ever lose your sense of humor!

You’ve experienced some tremendous milestones in your career to date. How does this one compare?

I have been incredibly fortunate with my career and have had some truly unexpected and unique moments. Being chosen as the first executive director of the Schmidt Ocean Institute is an amazing position and I am honored by the confidence that Eric and Wendy Schmidt, the staff of the Schmidt Ocean Institute, and others have placed in me. I look forward to leading this organization and working with scientists and engineers from around the world to improve the understanding and health of our ocean and help contribute to advancing new technologies. 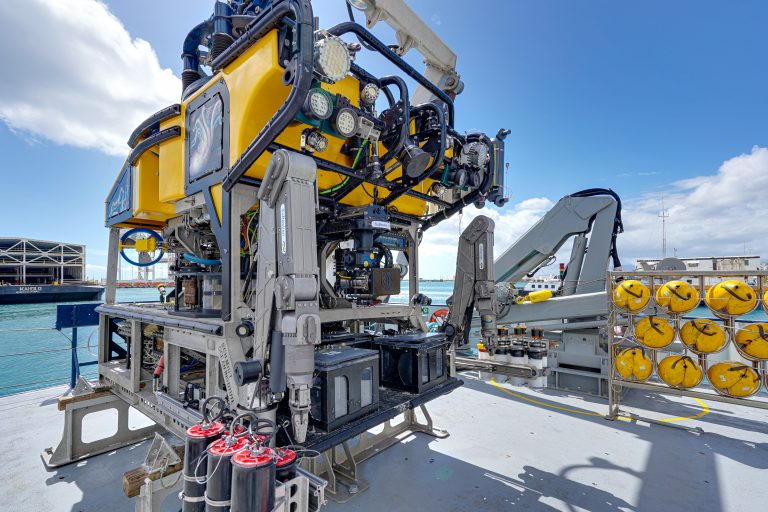 What are the most exciting areas of opportunity for the Schmidt Ocean Institute, and for ocean science more broadly?

I am most excited about incorporating new technology to complement our ongoing seagoing operations at Schmidt Ocean Institute. Technological advancements will allow us to scale both within the organization and across the ocean sciences, speeding up our knowledge of the oceans, from beneath the seafloor to above the sea surface, and to finer scales of resolution. We are already seeing exponential changes in technology in other fields such as medicine and transportation, so why not in ocean science? In the last few years we have seen huge leaps forward in unmanned and autonomous maritime technology and underwater robotics – unmanned surface vessels can now deploy and recover AUVs at sea without anyone on board. We are also seeing advances in machine learning and artificial intelligence, and in sensor capabilities such as more frequent use of eDNA. Combining these gives us nascent technologies that can identify and smartly track underwater chemical or biological signals to their source. Additionally, we can apply new technologies to how we communicate about the ocean. Advances in gaming and visualization, including virtual and augmented reality, mean that people can experience the ocean and its wonders in new and novel ways. For example, we have a high-resolution 4k camera on our ROV SuBastian which gives us amazing eyes into our underwater world as shown in this 4k highlight video from our last cruise exploring the Ningaloo Canyons off NW Australia.

Which parts of your job as ED do you like the most, and/or are most looking forward to?

I really enjoy working with the Schmidt Ocean Institute team and am proud of the dedication and commitment of the shore-side and at-sea personnel. I started the job on 24th February 2020 which, of course, coincided with the coronavirus outbreak, so it was a bit of an unusual beginning. In the first two weeks, before travel restrictions really kicked in, I was lucky to travel to Australia and meet some of the crew and visit the R/V Falkor. 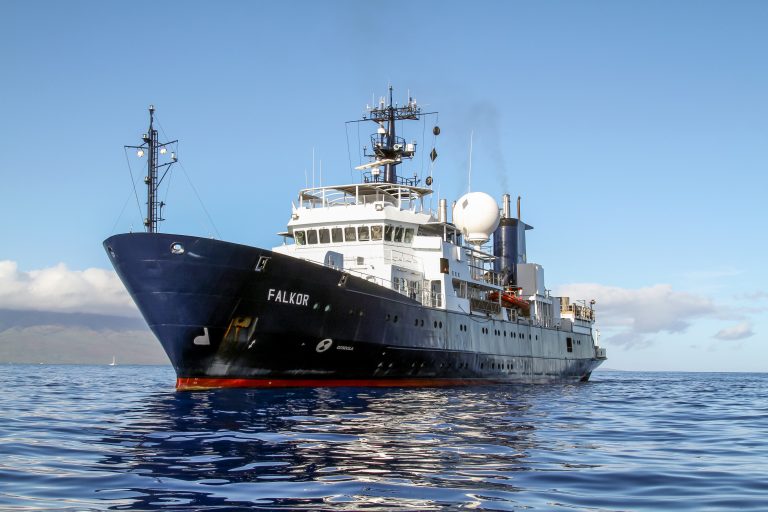 As with any new job, you get to know your colleagues and develop camaraderie over time—and a crisis tends to fast-forward that process. If I were an optimist (I am), this shortened timeline is the gift that the pandemic gave me as we dove almost immediately into an emergency scenario. I (and they) had no time to ease into things as we collectively ‘navigated’ through daily evolving restrictions in order to complete the science expedition and support the crew in their work.  Although unexpected, it has been worthwhile. We announced the discovery of quite possibly the longest sea creature in April and the scientists who were aboard the Falkor in March think they have discovered up to 30 new species during this research cruise off Western Australia. 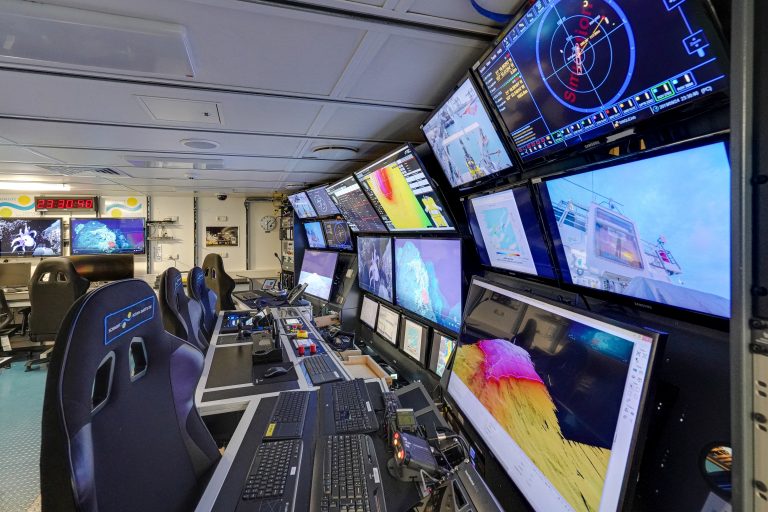 The Control Room on the Falkor, from which pilots operate the ROV SuBastianas guided by a team of scientists.

How does your role harness the strengths from previous roles you’ve had?

Every job I’ve had to date contributes to this role from learning to work with different personalities and people in leadership positions to gaining experience in science management.  When I was the Associate Director at the Florida Institute of Oceanography, I gained experience working with ship operations and scheduling, which has helped me now with Schmidt Ocean Institute’s research vessel Falkor. I had valuable lessons in emergency management at the UK Met Office, where I was seconded to assist in the prediction of ash from the Icelandic volcano that erupted in 2010. At the XPRIZE Foundation, I led an XPRIZE competition from concept to reality, giving me the opportunity to manage a multi-million-dollar budget, develop strategy for operations, marketing, budgeting, and overall success.

What skill(s) would you say is/are most important in an ED role?

A sense of humor! Strong communication skills and an ability to see the big picture, but also pay attention to details. Oh, and a calm head under pressure – I haven’t had a job yet where there wasn’t some sort of crisis of some magnitude.

What did you dream about doing when you were a kid or perhaps graduate student in Dr. Weisberg’s lab?

When I started my PhD, I probably had the same idea that many have at that stage in their career – to go into research and/or teaching at some University or College. As a graduate student I tried out a lot of things and learned that although I liked research, teaching a regular class year after year wasn’t for me. I also learned that I enjoyed getting involved with the community, whether that was as co-editor of The Squid’s Ink (the student newsletter), sitting on College committees, or writing my tropical storms blog. I found as much value in finding out what I didn’t want to do as trying to identify what I did want to do. My career path was definitely not planned and has been very serendipitous to-date and I think the skills you learn in graduate school can take you down many different avenues.

Recall one of your favorite career highlights.

Having the privilege to lead an XPRIZE was a definite highlight. I ran the Shell Ocean Discovery XPRIZE – a competition to spur innovation in autonomous and unmanned technologies to primarily map the sea floor. It was a very challenging XPRIZE competition and from the beginning, I was told by experts in the field that it was impossible to achieve what we had set out to accomplish.

Luckily, I am a very optimistic and persistent person, and even more luckily, I guess I didn’t know any better! The biggest challenge arose in 2017 when, only three weeks before the start of the first test, we watched Hurricanes Irma and Maria devastate the Caribbean and along with it, a year’s worth of work that went into establishing our test bed off Puerto Rico. Instead of testing, we struggled to contact our partners and friends on the island to see if they were alive, and simultaneously, we pivoted and restructured our plans. Turning a ‘ship’ the size of this XPRIZE was an immense undertaking which involved rescheduling over 400 people across 25 countries, whilst staying within budget, not jeopardizing the competition, and making sure the competing Teams and general public were aware of what was happening. Working with my team at XPRIZE, the Advisory Board, and Judging panel, we managed to complete that difficult first round of testing and went on to eventually complete the remaining tests and successfully announce winners in May 2019. In three and a half years, the competition garnered over eight billion media impressions globally and over 1,100 people worked to make that competition a reality. Before the competition, the estimate was that it would take 200-600 years to map the seabed but some of the technology is now, less than a year after the award, being commercialized and will be used to help map the seabed by 2030.

How did your work and education at CMS prepare you for the career you’ve built to date?

In addition to the excellent scientific education from the courses I took from faculty across the College, Bob Weisberg (my major Professor) encouraged us to think analytically and critically, which has been invaluable. I also had many opportunities to improve my communication skills and the writing class taught by then Dean Dr. Peter Betzer and my fellow graduate student, Kristen Kusek (her first class!) really honed my skills and did me a world of good. The scientific knowledge, analytical and critical thinking, and communication skills are vital components that will stand anyone in good stead for a multitude of positions. The connections I made in graduate school turned out to be important as well. For the Ocean Discovery XPRIZE, apart from myself, there were six others who worked on that competition – either in a technical capacity or as a judge – who are alumni or former staff from the College of Marine Science.

Favorite memory from your time at CMS?

The day I defended my PhD!! I have many fantastic memories from CMS, including being awarded the Getting, Garrels, and Knight Fellowships, sneaking around playing practical jokes with my fellow students (sometimes with faculty members or former Dean), going on research cruises in the Gulf or Pacific, and having papers accepted for publication. But I think because my PhD was a 10-year saga with a major set-back after 4-years and a change in topic in the 5th year, the day I defended my PhD was, for me, the culmination of a long journey of perseverance and I had such a sense of achievement.

If you could impart one piece of wisdom to budding marine scientists, what would it be?

This is a marvelous time to be in marine science. This next decade is the UN Decade of Ocean Sciences and the technology we have is taking us into a new era of ocean exploration and discovery, which is going to be really exciting. There will be many opportunities for marine scientists who have strong communication skills, or have an interest in technology, machine learning, handling big data and other such disciplines. For budding marine scientists, this is going to be your decade!

How is COVID-19 impacting the Institute?

We were already a relatively virtual Institute with shore-staff in Hawaii, Washington, California, North Carolina, DC, Germany, and Spain, and a crew from 12 different countries. However, we are now all working from our homes and in various stages of lock-down. The Falkor is still at sea. Although no new science party will board for the next couple of months, we will continue to try and collect bathymetric maps around Australia for as long as possible as we wait for travel restrictions to change.