Many thanks to all our sponsors, to our staff, and to all our attendees and presenters.  Scott Stemm did an incredible job running the streaming technology while Adam Stemm moderated the Q&A sessions.

Special thanks to Laura Azevedo for her excellent handling of conference organization and logistics.

John Wiltshire, Jim Hein, and Charles Morgan assisted with the program committee. Thanks much to John for traveling all the way from Hawaii to assist with moderator duties.

While it’s indeed unfortunate that we couldn’t meet in person, the virtual meeting went extremely well.  We learned a lot about hosting a virtual conference and plan to use the knowledge gained from this experience to host additional meetings and targeted workshops for IMMS in the future.

We hope to meet in person here in St. Petersburg next year.

All the best – Mark Luther

Catching a diversity of talks on Wednesday, I learned about everything from physical and chemical oceanographic applications to aid responsible seabed mining, foraminifera as the perfect baseline for a seabed mining zone, the law of the sea and proposed amendments, and of the impassioned pleas to ensure responsible utilization of the seabed resources in a way that truly benefits all of humanity -- particularly the resources lying beneath international waters, which have been declared common heritage for all peoples.

Dr. Sebastian Volkmann, founder of Blue Mining Consulting in the Netherlands, presented “Blue Solutions for a Green Future,” a powerful call to thoughtful consideration of best mining practices and resource consumption.  He believes it should not matter who mines, but rather how the resource is mined, where it goes, and who benefits.

Volkmann reiterated the fact that there is one ocean on this blue planet that belongs to all of us, regardless of whether one holds a mining license or shares in a mining company.  He is a mining engineer, and blue mining, he stated, is not a concept he is trying to own, but rather, he hopes, a concept that everyone will embrace.

What will it take to make blue mining environmentally responsible as well as viable, and how can mankind and future generations benefit from this venture?  Volkmann delved into these questions by outlining some problems that miners face:

Volkmann outlined the biggest deep-sea mining environmental impacts, then said that “we need more Benjamins,” referring to the visionary work being done by Benjamin Pietro Filardo and his team at Pliant Energy Systems who are exploring the use of environmentally benign robots to pluck nodules from the seafloor.

Following Volkmann’s talk, I had to opportunity to watch a presentation by Dr. Mark Luther, Professor of Physical Oceanography at USF CMS, demonstrating the use of benthic mini-landers that can sample a host of physical and chemical water properties useful to responsible and effective deep sea mining operations.

With intake tubes sampling at multiple points within 10 meters above the seafloor, the landers obtain profiles of turbidity at the boundary layer (between seafloor and water column) that can be used for sediment plume modelling.  Acoustic Doppler Current Profilers resolve turbulent velocity fluctuations, important for mining strategies, while oxygen and hydrocarbon sensors reveal what’s present in the water and at what concentrations.

Later in the morning session, I caught a talk by one of our recent graduates, Bryan O’Malley.  After giving a big picture view of why the resources at the bottom of the sea are important to society and the environmental challenges associated with mining them, O’Malley discussed the acquisition of baseline conditions and subsequent monitoring.

Foraminifera are an ideal organism to use in baseline and monitoring studies because they are great bioindicators, they’re globally distributed, and they’re small and easy to work with.  In essence, they offer an effective baseline and extremely efficient sampling costs.

On Tuesday, I watched several talks about sediment plumes associated with underwater mining and ideas on how to minimize environmental impacts.  These talks, in a sense, paralleled several of the talks I caught on Monday, in which designing for environmental impact mitigation, as well as economic efficiency, was a central theme of the industry’s current trajectory.

Addressing the plumes, Steven Rizea, of Deep Reach Technology, relayed the status of a U.S. Department of Energy project to develop a subsea mining system that mitigates the environmental impact of sediment plumes.  The method is two-fold: it attempts to reduce sediment ingested by the seafloor mining tool (a harvester, or crawler) while also limiting sediment that makes its way to the riser pipe that transports a slurry of water and ore to the mining support vessel.

Most of the proposed improvements occur within the inner workings of the large harvesting machines, where channels would funnel the polymetallic modules through a stage that effectively rinses the nodules clean of sediment using injected sediment-free water before they’re pumped up the riser.

Deep Reach Technology has partnered with Ground Effects Environmental Services in this endeavor, and chiming in on the presentation from Ground Effects was Lori Johnston to explain electrocoagulation.

Larger flocs settle faster than finer sediment particles, meaning they spend less time in suspension and travel less far.  By performing flocculation through electrocoagulation, the proposed system can transform the suspended sediment flowing through the harvesting machine into flocs before returning them to the seabed in a smaller, more contained plume. 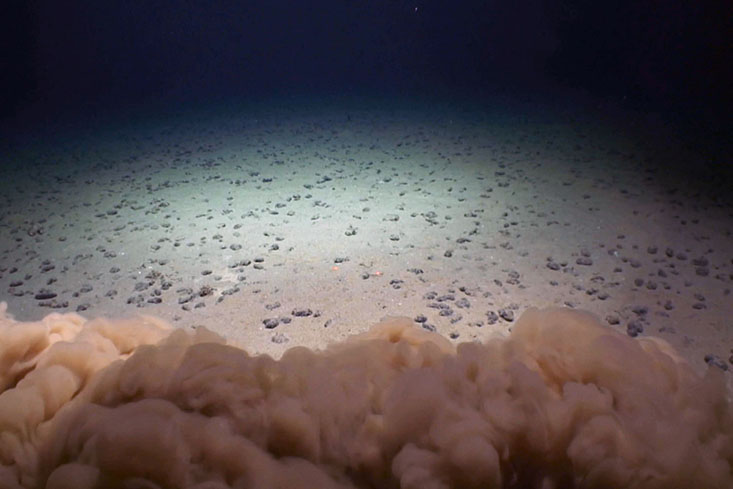 I was lucky to enjoy a presentation by Benjamin Pietro Filardo, who represented North American Consortium for Responsible Ocean Mining (NACROM) and Pliant Energy Systems at the UMC 2020.  It could have been a sci-fi conference.

Pliant Energy Systems is working on a new method for extracting deep sea mineral deposits that will employ large fleets of autonomous robots to pluck the polymetallic nodules, store them, and carry them to the surface by deploying a lift bag.  Picture Triassic-sized underwater centipedes, each leg with a nodule-grasping claw, and long, lengthwise fins that undulate like a sea slug.  There’s even the potential for replacing the nodules one-by-one with less valuable rocks that double as ballast to aid the robots’ descent.

Are robots ready for the task at hand? 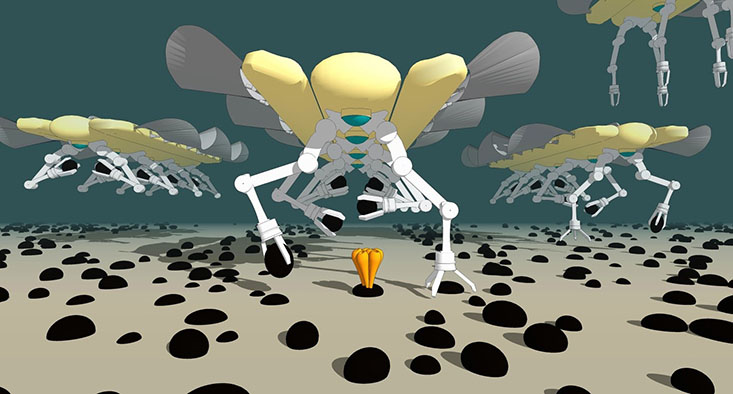 According to Filardo, yes.  Actually, in comparison to fruit-picking robots in orchards and trash-sorting robots at recycling plants, the advancements in robotics needed to pluck metal rock-balls off the seafloor doesn’t seem all that challenging.  That is, once all of the usual massive hurdles of working 4 kilometers under the surface of the ocean are overcome, the robotics of picking shouldn’t be a deal breaker.  There are still many logistical and engineering steps to complete, but the general concept offers much hope for polymetallic seafloor mining at near-zero cost to the environment.

Beyond mining, a few noteworthy applications presented by Filardo include using the robots to harvest scallops (instead of using trawlers) and even for replanting seagrass and coral, a worthy task that cannot feasibly be done by humans at the scale needed to overcome the current losses seen around the globe.

Another highlight today was a presentation by Emanuele Di Lorenzo, who represented the Ocean Visions Consortium [LINK oceanvisions.org], which was established in 2019. Here are some takeaways from the talk entitled, “Ocean Visions: Transforming Science & & Engineering into Ocean Solutions”:

Researchers and mining experts from around the world joined together virtually Sunday night for the opening of the 2020 Underwater Minerals Conference (UMC), hosted by Dr. Mark Luther of the USF College of Marine Science.   Luther is filling in for the originally scheduled host, Greg Stemm, who has been “stuck” (debatable use of the word) on an island in the South Pacific since Covid-19 escalated in early 2020.

Stemm, who co-founded Odyssey Marine Exploration, is the current president of the International Marine Minerals Society, the primary sponsor of the conference, and will soon be passing the reigns to Samantha Smith, of Blue Globe Solutions.  Luther has been integral in the relocation of the IMMS from the University of Hawaii to their new host institution, the University of South Florida.

The online meeting on Sunday night included a very brief intro to the week ahead and a short tutorial on attending and networking at an online virtual conference.  This year sees the first-ever virtual UMC and, despite desires to meet in person for the annual event, the society’s members anticipate more frequent, less formal meetings and gatherings throughout the year, thanks to an embrace of online meeting platforms.

Luther finished the introductory remarks by offering a virtual toast to the attendees, wishing that all could be gathered in person, as originally planned, at the Vinoy Renaissance Hotel in downtown St. Petersburg.

The conference kicks off Monday morning and wraps up with an all-day workshop on Thursday, presented by the Bureau of Energy Management and the United States Geological Survey.  UMC pulls together a wide range of talks on mining practices, scientific methods, environmental and conservation concerns, regulations, and new technology.  After some formal introductions and welcomes, including a video greeting by Dr. Thomas Frazer, dean of the USF College of Marine Science, Session I will delve into Equipment Technology & Innovations.

The focus of this year’s conference, which I look forward to exploring throughout the week, is “Marine Minerals:  Solutions for Building a Green Energy Future.”  The problem at hand is the green conundrum:  a green, sustainable economy will require extraction of precious metals to power that economy.  Many feel extraction can be done more environmentally friendly and socially responsibly on the deep sea-bed than current terrestrial practices allow – yet there is still some cost, and, as oceanographers and marine biologists caution, until we have more research on the deep sea, the cost is unknown.  Presentations this week will address some hopeful new options, including technology that seems to offer mineral extraction at zero cost to the environment.