Campers and science mentors with USF's Oceanography Camp for Girls (OCG) smile as they wrap up the first virtual event of the 2020 camp. Photo courtesy of OCG.

Teresa Greely, PhD, has worked as the director of education and outreach for the College of Marine Science for the last 25 years. Each summer, without fail, she has coordinated USF’s Oceanography Camp for Girls (OCG), a summer camp for girls beginning 9th grade. A pandemic wasn’t about to stop the 2020 OCG team.

The camp will look a bit different this year. Instead of the traditional three-week in-person format, the camp will be a hybrid virtual and in-person format taking place over the next nine months. Girls will participate in virtual events throughout the next school year, culminating in three in-person field trips throughout Tampa Bay during spring break. Despite these changes, it will be undeniably OCG - filled with fun, laughter, and of course, science.

For most, running one virtual camp would be enough, but Greely didn’t stop there. At the beginning of the summer, coordinators for a program called Brite reached out to Greely to see if she and OCG alumni would be willing to take part in their pilot program. The program, started by the World of Science Festival, the National Girls Collaborative Project, and Hello Studios, is a fully online three-week STEM summer camp for girls ages 13-16.

Now Greely finds herself at the forefront of two new virtual summer camp experiences. “Regardless of the setting, a science camp experience should be focused on giving each girl a positive sense of self and science,” said Greely. “I think now, more than ever, these girls are looking for a safe space to learn and build connections.”

So, it seems, in a world filled with uncertainty, virtual science camp may be just what the doctor ordered.

On July 18th, OCG held a virtual camp kick off. One-by-one the 26 girls' faces popped into the meeting, eagerly peering at the screen to get a first look at their fellow campers.

Despite sitting behind a screen, it felt like a normal first day of camp. A bit awkward at first as girls stumbled through introductions. But by the end of the two-hour event, all signs of awkwardness had vanished; each Zoom square filled with a smiling face.

Greely credits the successful transition to a virtual format to her two co-leaders, College of Marine Science graduate student, Savannah Hartman, and Breitbart lab outreach coordinator, Makenzie Kerr. Both Hartman and Kerr were nervous when they heard the camp was moving to an online format, but eager to take on the challenge.

“It was hard to hear we needed to move to a virtual camp, but I knew it was the right thing to do,” said Kerr. “Although I knew it would be a challenge to move things online, I enjoy the rush of creating something new and innovative. As a scientist, I am always on my toes and ready for the next hurdle. New is exciting!”

The camp’s kick off perfectly highlighted this innovative approach, embracing technology to engage the campers through a variety of activities. Hartman and Kerr knew the last thing they wanted to do was force a group of teenage girls to stare at a screen for two hours, with no way to participate. Instead, they allowed girls to write on the screen using the white board function, split girls into small groups using breakout rooms, and played a game that allowed girls to switch their cameras on and off. The result? A two hour Zoom session that was actually fun. 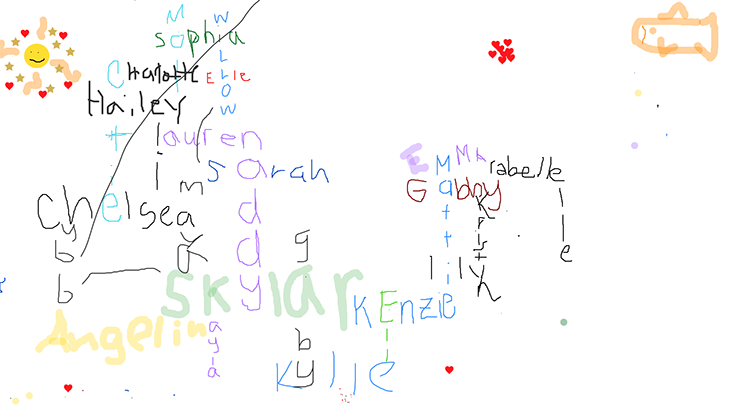 Screenshot of the name acrostic created by OCG campers using the whiteboard function during the camp’s kickoff event. Kerr and Hartman took a creative approach to the Zoom call, allowing the girls to draw and play games throughout the two hour event. Photo courtesy of OCG.

Like OCG, the Brite program is innovative in its approach to an online STEM summer camp. The 11 OCG alumni who are part of Brite take part in virtual individual and communal lessons led by both Greely and Kerr. These lessons are augmented with behind-the-scenes tours of museums, parks, labs, and studios, giving campers the chance to escape to somewhere new. In addition, campers are given the opportunity to video call with science professionals, who provide the girls with a real-life example of what a career in STEM looks like.

“With OCG, these girls considered not only what it meant to be a marine scientist, but a scientist more broadly,” said Greely. “We’re excited about Brite because it allows the girls to continue to pursue their passion for the ocean and science and explore the many unique facets of science.”

Greely and Kerr also view the program as the basis for future OCG programming. “Brite is taking a really unique approach to STEM education,” said Kerr. “This summer we are able to trial what works and what doesn’t work with our OCG alumni and determine what activities might work in the format of our camp moving forward.”

While Greely admits in some cases there is no replacement for in-person interactions, she is eager to embrace a more hybrid-type approach to camp programming in the future. Ideally, this would allow girls to take part in the three week in-person camp experience, but also access online learning resources after they’ve completed camp. “I see online resources as a way to extend learning past the time these girls have come to camp,” said Greely. “To keep them engaged in the science and the OCG community.” 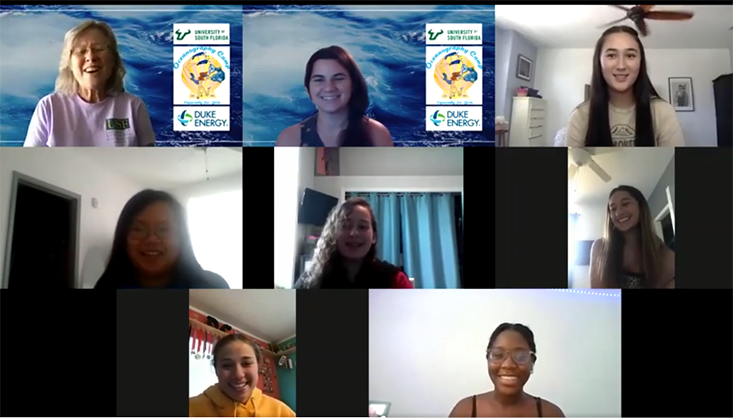 Greely and Kerr (top left and top middle, respectively) laugh with OCG alumni as a part of the Brite program. As a part of the three-week virtual camp the girls are exploring topics ranging from the intersection of science and art to the challenges associated with conducting experiments on the human brain. Photo courtesy of Makenzie Kerr.

At the end of the OCG kickoff event, Kerr asked everyone to share something that had made them smile that day. One camper responded, “Today was a great distraction from what’s going on in the world.”

Whether girls are tuning into OCG or the Brite program this summer, one thing is clear – these virtual science camps are providing a vital respite from the outside world. For a few hours, they allow each girl to immerse themselves in the world of science, forgetting the craziness in the world around them.

“OCG has always been about inspiring and motivating young women, and we need to continue doing that even in the midst of all the uncertainty that is occurring in the world right now,” said Hartman. “I believe this camp provides them with an outlet to grow not only as a scientist in the making, but as a person, and flourish in this transitional period. OCG can be a staple in their lives over the next several months when things aren’t guaranteed.”