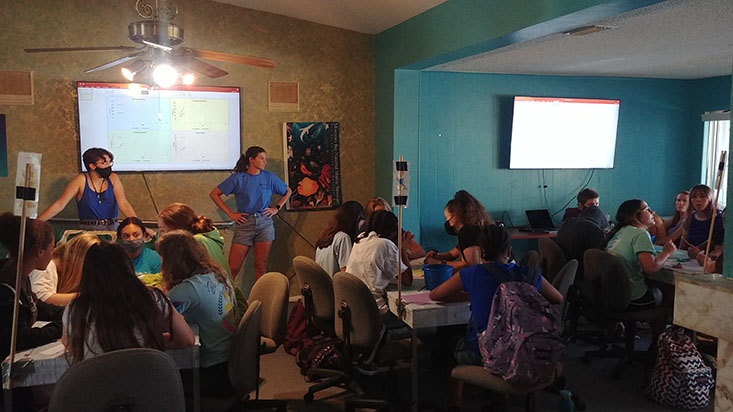 Science Mentors Bella and Kylee present the fisheries data to the campers.

On the last Wednesday of OCG the campers participated in a team activity called “Fish Banks,” a simulation game in which the girls acted as hypothetical fishing companies. Divided into groups, each fishing company could decide where to distribute their fishing fleet onto our game board: in coastal waters, offshore, and/or safe in the harbor. Their goal when the game began was to finish with the highest net assets of any team, and to make as much money and catch as many fish as possible.

For each simulated year of the activity, groups decided where to place their boats based on data provided by the game moderators for each of the fishing grounds, including last year’s catch, the size of the fishing fleet, the remaining fish population, and the number of new fish born. As time went on and all groups tried to outcompete the others, the campers noticed the fish population steadily decreasing, resulting in less fish to catch and less money to be made. By the last few years of the simulation, multiple fishing companies formed an alliance to start fishing more sustainably so that the fish population could persist.

When the ten-year simulation was over, the fish populations both inshore and offshore had decreased to almost zero. This demonstrated to the campers the “Tragedy of the Commons,” the phenomenon in which common resources become depleted if individuals only act in their own self-interest. The activity was completed with a short lecture by Science Mentor Mike about how fisheries are managed in the United States in order to prevent the Tragedy of the Commons that was seen in our Fish Banks simulation.

Throughout the gameplay, each group was given the chance to flex their creative muscles through creating a logo, jingle, and radio commercial promoting their fishing company. Some friendly rivalry between fishing companies was born and expressed in their fictional letters home to family, but at the end of the day the campers learned a valuable lesson about working together to conserve our natural resources.

View the slideshow below.