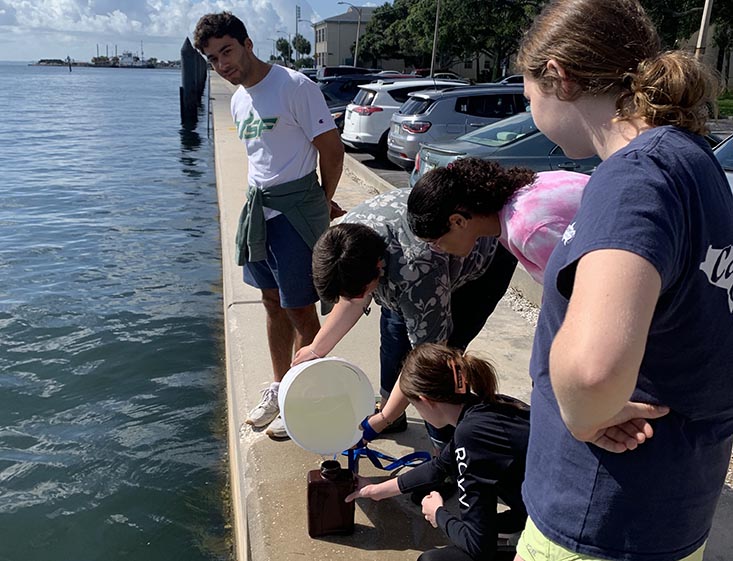 Campers became detectives for a day as they collected the DNA left behind by organisms in the water, known as environmental DNA (eDNA), to identify organisms from different habitats! DNA is the genetic material of all life and provides a blueprint that makes us who we are. Because of this, all we need is the DNA of an organisms to identify who it is. Much like how a detective can identify a suspect using the DNA left at a crime scene, scientists can identify organisms by collecting eDNA that is left behind by these organisms through processes such as shedding their scales/cells, leaving behind mucous, and even pooping. Since DNA is found in every living creature on Earth and practically all the cells that make up an organism contain the full set of an organism’s DNA, we only need one cell containing DNA to identify the presence of an organism!  This is a great tool for scientists because it can allow us to identify multiple organisms from the smallest microbes to the largest whale in a single water sample, even if we can’t see them. This allows scientists to have a better understanding of the biodiversity of an area.

To understand how scientists use DNA to identify organisms, campers started out by building their own model DNA molecules out of candy and toothpicks. We learned how DNA is composed of a sugar phosphate backbone, bases, and is arranged in a double helix structure. The DNA bases are important for identification because they create a unique code that informs scientists which organism the DNA is from. However, for scientists to be able to read this code they first need to make billions of copies of the DNA collected to make sure they capture as much diversity as possible. To make all those copies we use the polymerase chain reaction (PCR), which the campers demonstrated by breaking apart their DNA molecules into two strands and then making a copy of each strand’s code, showing how in each round of PCR you double the amount of DNA. PCR is an essential molecular biology tool and is used for many different applications, from identifying multiple organisms using eDNA to identifying the presence of one organism like in a COVID-19 test! 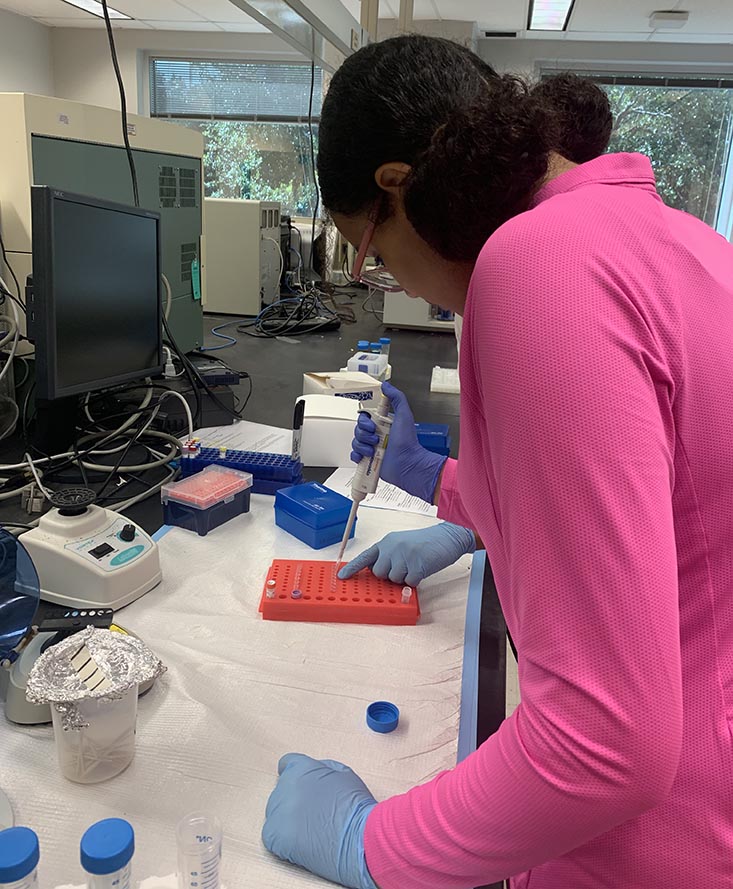 Now that the campers were equipped with all this DNA knowledge, they were ready to become detectives! In the lab there were three mystery environments filled with different colored beads that represented the eDNA left behind by marine organisms. Campers collected beads from these mystery environments and filtered their water samples to concentrate the “eDNA.” Just as scientists must decode eDNA, campers used a color key to decode which beads represented each marine organism. With this new information the campers deduced which environment each eDNA sample came from based on the organisms they recovered. Campers then learned about the steps scientists would normally have to do to go from collecting and filtering eDNA to identifying which organisms were present in the environment.

After the campers successfully solved the case of the mystery environments, we went out to collect some real eDNA! Equipped with just a bucket and a rope the campers collected water off the seawall before taking it back to the lab and filtering it. One of the best things about eDNA research is that collecting eDNA is extremely easy and safe for the environment! All that is needed is a filtered water sample.

After collecting eDNA, the next step is to extract and purify that DNA so we can use PCR to make billions of copies. Campers got to help their lab leader, Keith, with his research by performing this DNA extraction together! The samples the campers extracted will help Keith identify which fish species are spawning where in the Gulf of Mexico.