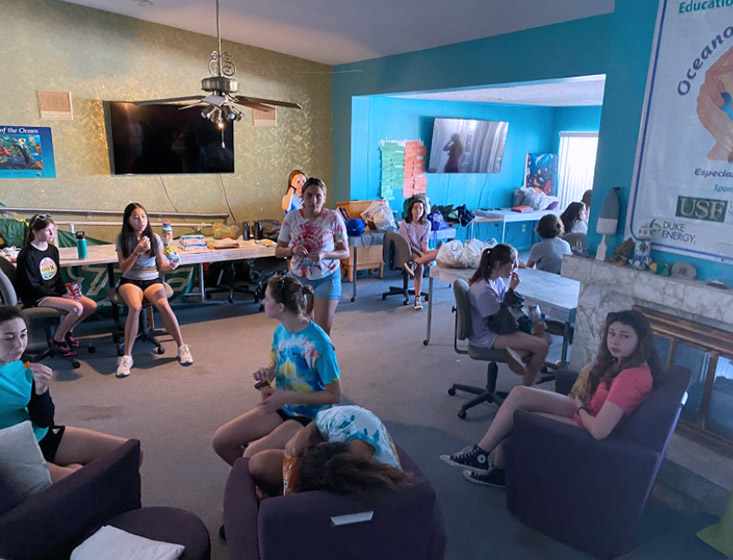 Campers taking a break for lunch at the Clam.

On the Tuesday of our last week of camp, we spent most of the day engaged in an activity called Fish Banks. The campers have spent the last two weeks outdoors getting their hands on fishing experience and have started to apply the data they collected there to the types of analytic science we do indoors; this simulation activity allowed them to take those skills to the next level. At the University’s off campus base, affectionately nick-named “The Clam”, the entire space was transformed into a base for a generation of fishing merchants. The thirty campers were split into six teams, and created their own commercial fishing companies, which were increasingly personalized throughout the game.

Fish Banks is an online data simulator that models fish populations over time in response to player decisions. Each team’s company bought and sold boats, moved them from the estuary (shallower) to the deep ocean, and sold their fish to turn the highest profit possible over ten years. Every round they made their yearly decisions and got to see the direct changes on the fish populations by year as they tried to outcompete their fellow campers (or rival fishermen).

At first, they start strategizing with their team to make the most money by the end of ten years. They have the goal of making more than their rivals and figure out quickly that the easiest way to make more money is to catch more fish. We all get very invested in the brands as they develop; as the game progresses, the teams write letters home to family, create logos and jingles, and even act out commercials. The rivalry between companies is fierce. As the years went by, Science Mentors Becky and Jason graphed the fish population data and earnings data in direct response to the camper’s decisions. In “real time” the campers start to see the fast-growing deterioration of the fish populations. The ecosystem fails in response to their aggressive commercially focused fishing, and as the ecosystem fails, so do their businesses. 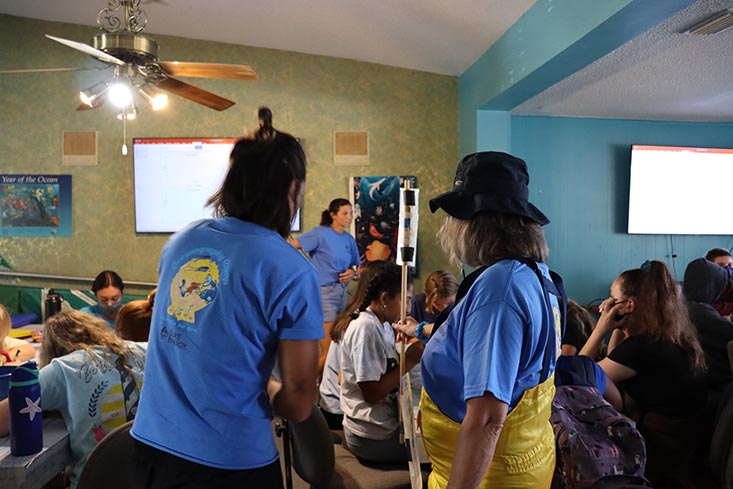 Dr. Greely donning her fishing waders and working with the science mentors to moderate the game.

We play Fish Banks because it is an incredibly insightful lesson into the politics and dilemmas of modern commercial fishing. Having been through the thought process from the business aspect, at the end of the game Science Mentor Mike walks them through the results as fisheries scientists. The campers fought Slimy Bankers, fellow companies, and the declining ecosystem during the game, and came away with a mature understanding of sustainable fishing and its importance. Fish Banks models the importance of sustainable fishing practices and how easy it can be to misuse our natural resources.