No, the Sky isn’t Falling. But the Ocean is Losing Oxygen. 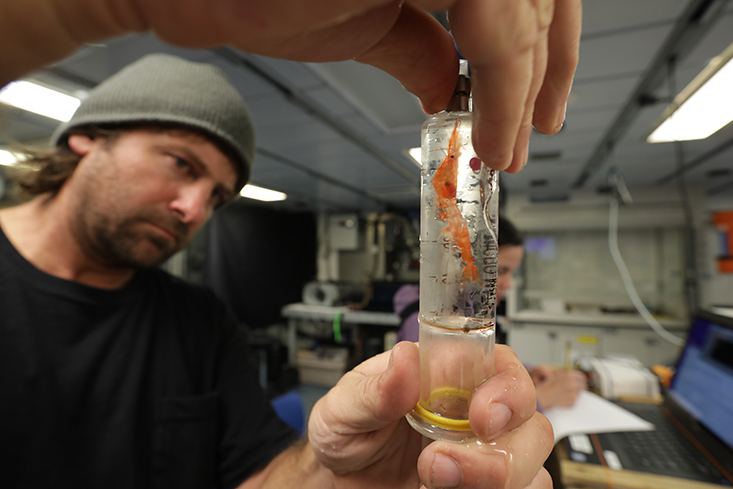 And for marine life, that’s kinda like the sky falling (and not great news for us).

IMAGE ABOVE: Brad Seibel onboard a ship and placing a shrimp in a respirometry chamber. Credit Stephani Gordon, Open Boat Films.

While landlubbing house hunters sure don’t have it easy these days, there’s another community—one that dwarfs the human population in size—that is also suffering the woes of shrinking real estate: animals that live in the ocean.

The problem, said USF marine scientist Brad Seibel, is simple based on first order chemistry principles:  warm water holds less oxygen (the ocean has been warming for several decades) and warm water elevates the amount of oxygen animals need to function. It all adds up to less viable habitat for the fish, plankton, squid, jellyfish, you name it, that need oxygen to live.

This problem of a less “breathable” ocean, of course, is anything but simple when you dig into the details. Nor are the solutions required to fix it all that straightforward. And that’s why Seibel’s lab at the USF College of Marine Science is devoted to teasing out the mysteries of what scientists call ocean deoxygenation. 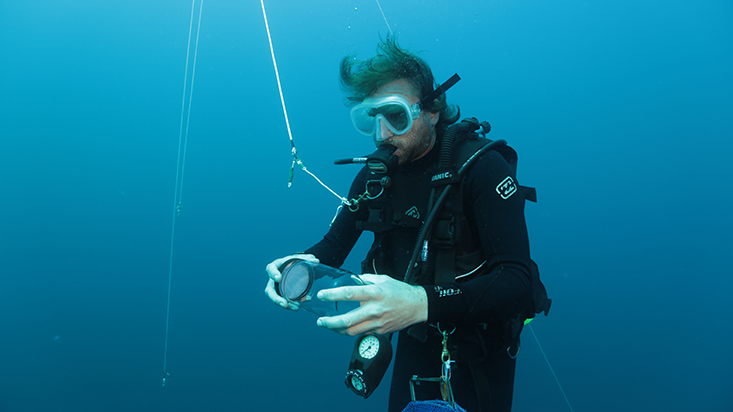 The implications of his research, for those who appreciate that every other breath we take comes from the sea, can absolutely slay hopes for a good night’s sleep -- but Seibel, who’s been studying this problem for more than 20 years, maintains a (mostly) positive outlook.

“I do think we still have time to avoid the worst consequences of ocean warming and deoxygenation that have been imagined and projected by others in the scientific community,” said Seibel. “But these changes are already happening now and we’re already seeing the consequences in shifting species distributions, evolving relationships between predators and prey, changes in our fisheries, resources, and more.”

Seibel’s work to unearth a new understanding of the quantitative relationship between the oxygen and temperature sensitivities of marine animals earned him a USF Outstanding Research Award in 2021.

One Nature study Seibel was involved with, which the World Economic Forum featured on its website, found that many marine animals are already living close to their oxygen limits. It wasn’t a small dataset. The work included analyses of 72 species from five different groups of marine animals: vertebrates (like fish), crustaceans, mollusks, segmented worms, and jellyfish. 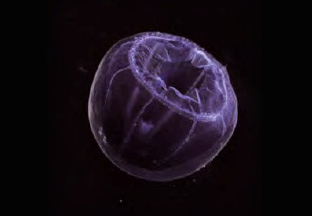 Living close to the breathable edge means that any small changes in oxygen – even less than one percent -- can have a significant impact on growth rate, reproduction, how species interact, and more, Seibel said. “Animals can adjust to a certain extent but these changes in the climate and the ocean mean their windows of comfort are compressing, shifting, or both,” he said.

Additional work by Seibel and his colleagues takes us to the sunless parts of the sea.

He coauthored a chapter in a report by the International Union for Conservation of Nature (IUCN) with a sobering title: “Ocean deoxygenation: everyone’s problem.” In it, Seibel explains how less oxygen in the sea could affect animals living within the ocean’s twilight zone between about 200 to 1000 meters depth.  It’s one of the largest habitats on the planet.

This is where the bristlemouth cyclothone, thought to be the most abundant vertebrate on the planet, roams along with many other specially adapted fish and zooplankton that have evolved to live not only without much light, but within an extremely tight oxygen zone.

“These animals have evolved a tremendous ability to extract and use the small amount of oxygen available in their environment,” Seibel said. “Even the tiniest tweak to the available oxygen can significantly alter the community structure of species that live here, and that could spell trouble for the whole ocean.”

Let’s unpack that last sentence a bit because it is a big deal.

Many animals living in the ocean’s twilight zone are vertical migrators. They live at depth during the day and migrate toward the ocean surface at night to eat in what amounts to the largest daily migration of animals on the planet. They also play a critical role in the biological carbon pump, which is how the ocean removes carbon dioxide from the atmosphere and deposits it on the seafloor. Most oceanography 101 courses tackle the biological pump early on because it is fundamental to understanding the role the ocean plays in the overall health and functioning of our blue planet.

Plantlike organisms living at the ocean surface called phytoplankton use sunlight to make food from water and carbon dioxide through the process of photosynthesis, just like plants do on land. Oxygen is a product of this reaction (which is why you can thank a phytoplankton for every other breath you take). The phytoplankton are dinner for the vertical migrators. As these animals head back to the deep, their digestive processes deposit the carbon they consumed at depth, away from the atmosphere. They, too, eventually die, so their carbon ends up in the deep-sea food web or on the seafloor eventually.

The biological pump is paramount for a planet whose human inhabitants are pumping out more carbon dioxide than the ocean can slurp up. In short, we don’t want it to falter. But as Seibel said, the ocean is losing oxygen and this is shrinking or shifting the viable habitat of many species in the twilight zone.

“We know the biological pump is changing but we don’t yet understand exactly how,” said Seibel. But the science community does know one thing for sure: in recent years vertical migrators have already begun to shift the zones they have historically called home. 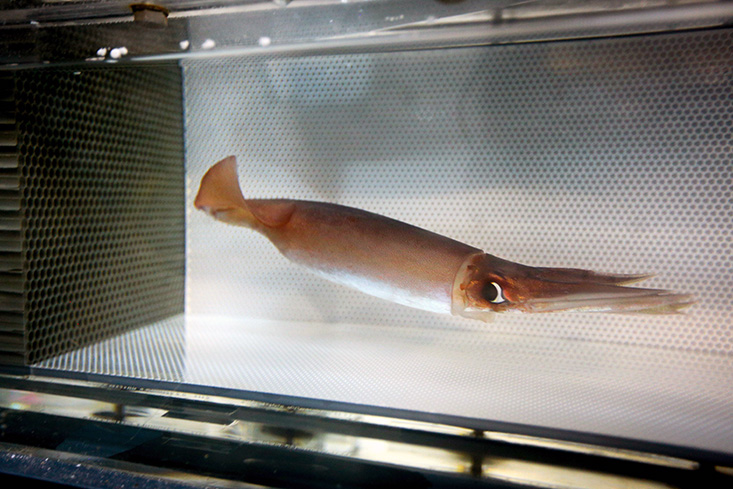 The jumbo squid, or Dosidicus gigas, inside a swim tunnel respirometer onboard a research ship.  Seibel’s team can control the water flow and have the squid swim against a current so they can measure their active metabolic rates. Credit Stephani Gordon, Open Boat Films.

For example, the jumbo squid is a vertical migrator living in the warm eastern tropical Pacific. It has a voracious appetite. When it migrates to shallower waters for a meal, its metabolic rate skyrockets, Seibel said, but when it heads back down to the sunless deep its metabolism is more sloth than squid.

“These squid don’t do much in the depths during the daytime at all,” Seibel said. Unlike other squid species, this one has the ability to change its blood chemistry to adapt to the low oxygen conditions.

A squid, Pterygioteuthis gemmata, which vertically migrates between 250 meters (where it lives during the daytime) and 50 m (it migrates toward the surface at night). Credit Stephani Gordon, Open Boat Films.

In recent years, the jumbo squid has expanded its habitat to northern latitudes, which jives with the general trend scientists are seeing, Seibel said: as tropical areas warm, the animals living there are shifting toward more polar latitudes.

But in this case, Seibel’s not convinced that northward migration is specifically due to the ocean losing oxygen or to native habitat becoming too warm. He thinks that warming water means northern latitudes that were previously too cold for species like the jumbo squid are opening up creating new habitat – and these nuances in our understanding really matter, Seibel said. Thanks to funding from the National Science Foundation, he and his team are scheduled on research expeditions in the eastern tropical Pacific in 2023 and 2024 to further test this hypothesis.

“There’s a danger in taking action on an incomplete understanding of the environment, and many questions remain,” he said.