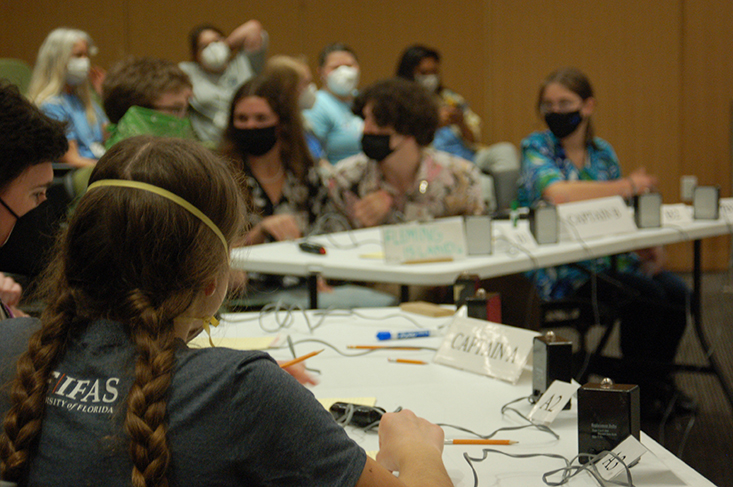 The 18th Annual National Ocean Sciences Bowl (NOSB) Spoonbill Bowl was hosted by USF College of Marine Science on February 11th and 12th, 2022. NOSB is a marine science themed academic competition for high school students across the country. The Spoonbill Bowl serves students on the Eastern Coast of Florida once a year.

The event began with a team dinner at the Clam Bayou Marine Education Center Friday night. The teams enjoyed a beautiful sunset, a wonderful talk about coastal mapping by guest speaker, Dr. Cheryl Hapke, and a climate change discussion with Dr. Gary Mitchum. 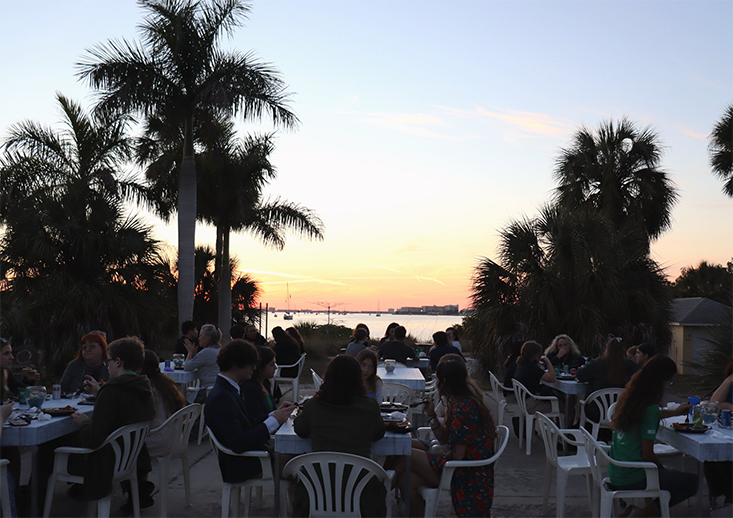 Teams gathered for a dinner the night before the event to hear guest speakers and meet other competitors. 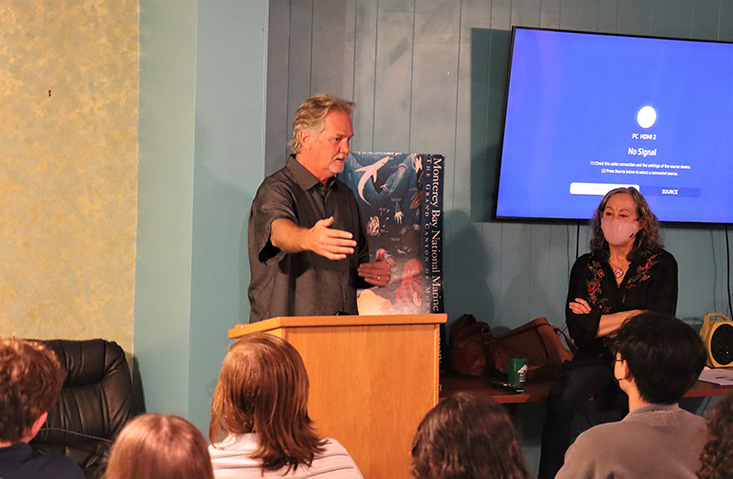 Guest speakers Cheryl Hapke and Gary Mitchum discussed their work in oceanography and climate change with the spoonbill participants at the team dinner event.

Early Saturday morning teams arrived on the USF St. Peterburg campus to have a full day of competition. The matches consisted of round-robin (morning) and single-elimination (afternoon) formats between 15 teams. Throughout each round the teams answered written, multiple-choice, and short-answer questions about the oceans. 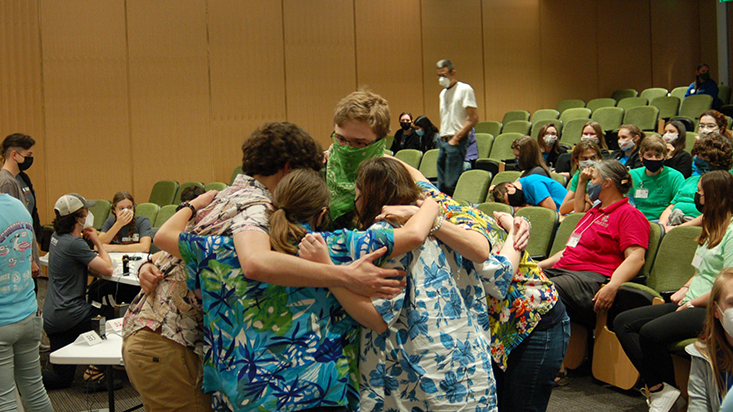 Teams competed head-to-head in front of audiences in round-robin and single-elimination formats.

The finals started like any other, with two teams battling it out for first and second place, Academy of Environmental Science Team A (AES (A)) versus Saint Stephen’s Episcopal School Team A (SSES (A)). Each round began with two Team Challenge Questions, where teams work together to furiously write down their responses to written questions. You could see steam coming off both teams as they spent the full 4-minute periods writing. Behind them, the audience had to be silent. Some twiddled their thumbs, some tried to hear the team whispers, while many closed their eyes for a quick nap after a long day.

As soon as pencils were down, the 6-minute toss-up buzzer session began. Each team member held a buzzer, which they could press whenever they wanted to answer the multiple-choice questions. At the end of the 6-minutes, AES (A) had a small lead 12-8. 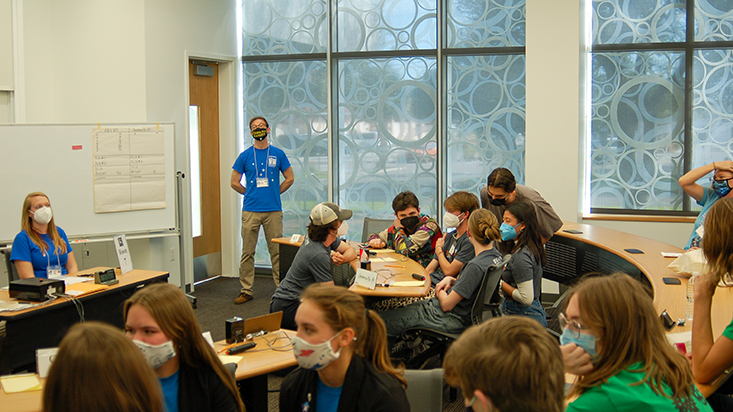 An intense final round of competition took place at the end of a long day of fast-paced questions.

After the room officials calmed the audience down from cheering, the second 6-minute toss-up buzzer round began. The teams were neck and neck, taking turns answering questions correctly. On the last question, the score was AES (A) – 40, SSES (A) – 36, SSES (A) buzzed in and guessed the final question correctly, leaving the score 40-40! The crowd erupted! Everyone was on their feet cheering for both teams.

Teresa Greely announced that the teams would need to do an official tie-breaker round of 10 toss-up buzzer questions. Everyone in the room was on the edge of their seat. The teams went back and forth answering questions correctly, leaving the score a tie until the very last question. AES (A) answered the final question correctly and won the Spoonbill Bowl! The team welled up with happy tears and hugged. It was an amazing end to a long day.

Karina Lowyns, a Spoonbill volunteer, exclaimed, “…WOW. It was so intense and to believe that I was a part of making it happen and making a lasting impression on high school students for the future is absolutely crazy.” 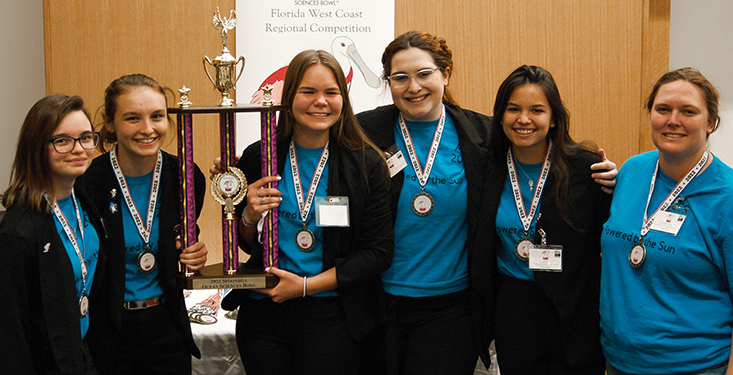 Thank you so much to all our donors, volunteers, teams, and coaches for making the day fun and exciting for all! We can’t wait to do it again next year. 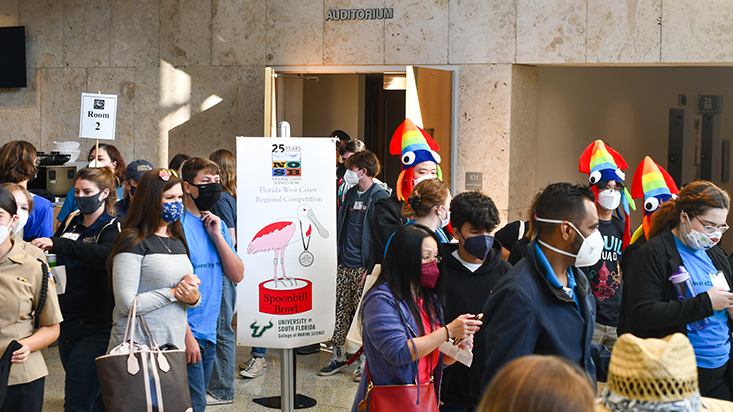 Participants, volunteers, and audience members exit the auditorium between competition.