A Puppet Show on a Chilly COVID-safe Calibration Cruise? 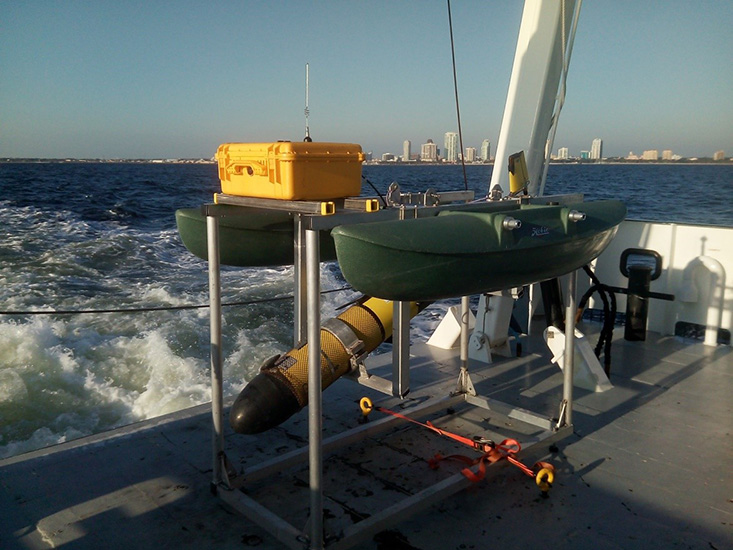 An autonomous underwater glider rests securely in its echosounder calibration float aboard the deck of the R/V Hogarth.

December 09, 2020, St. Petersburg, FL – Under good weather and calm seas, and additional precautions due to COVID-19, our research team left port from the USF College of Marine Science to a site just two miles away from Bayboro Harbor.  The team was comprised of the FIO crew of the R/V Hogarth and scientists from the College of Marine Science (CMS) from the University of South Florida.

Our goal: to calibrate echosounders, a type of sonar used to determine the depth of the seafloor and locate objects and fish in the water.  Our destination:  a current-scoured portion of Tampa Bay that is slightly deeper than the rest of the shallow bay, the St. Petersburg Bay Reef.  Deep enough, though, to calibrate the SIMRAD EK80 echosounders installed on the R/V Hogarth, a research vessel operated by the Florida Institute of Oceanography (FIO), as well as the “EKMini” echosounder, which is installed in one of USF’s autonomous underwater gliders.  These robots can transit in the ocean for hundreds of miles over weeks to months to provide valuable water column information to researchers.

The benefit of using these types of calibrated echosounders is that they can help scientists estimate the biomass of the fish swimming below as the vessel or gliders transit.

Chad Lembke, Chief Scientist and Research Faculty at USF’s CMS Ocean technology Group (COT) said, “We are already learning how to create maps of fish or plankton biomass with vessel-based sonars.  If we can do the same with robotic platforms like the gliders at a fraction of the cost, we can provide fisheries researchers with new sources of data to aid their planning.”

USF and the National Oceanic and Atmospheric Association (NOAA) in partnership with Teledyne Webb Research Corporation and ASL Environmental Sciences, were the first to integrate a calibrated echosounder into an ocean glider in 2017.  They collected some of the first remotely sensed fish and plankton distribution data coupled directly to onboard oceanographic sensor data.  They have now expanded efforts to integrate another fisheries echosounder into the gliders in a collaboration between USF, Florida International University (FIU), NOAA, the University of Washington (UW), Webb Research, and Kongsberg Maritime. 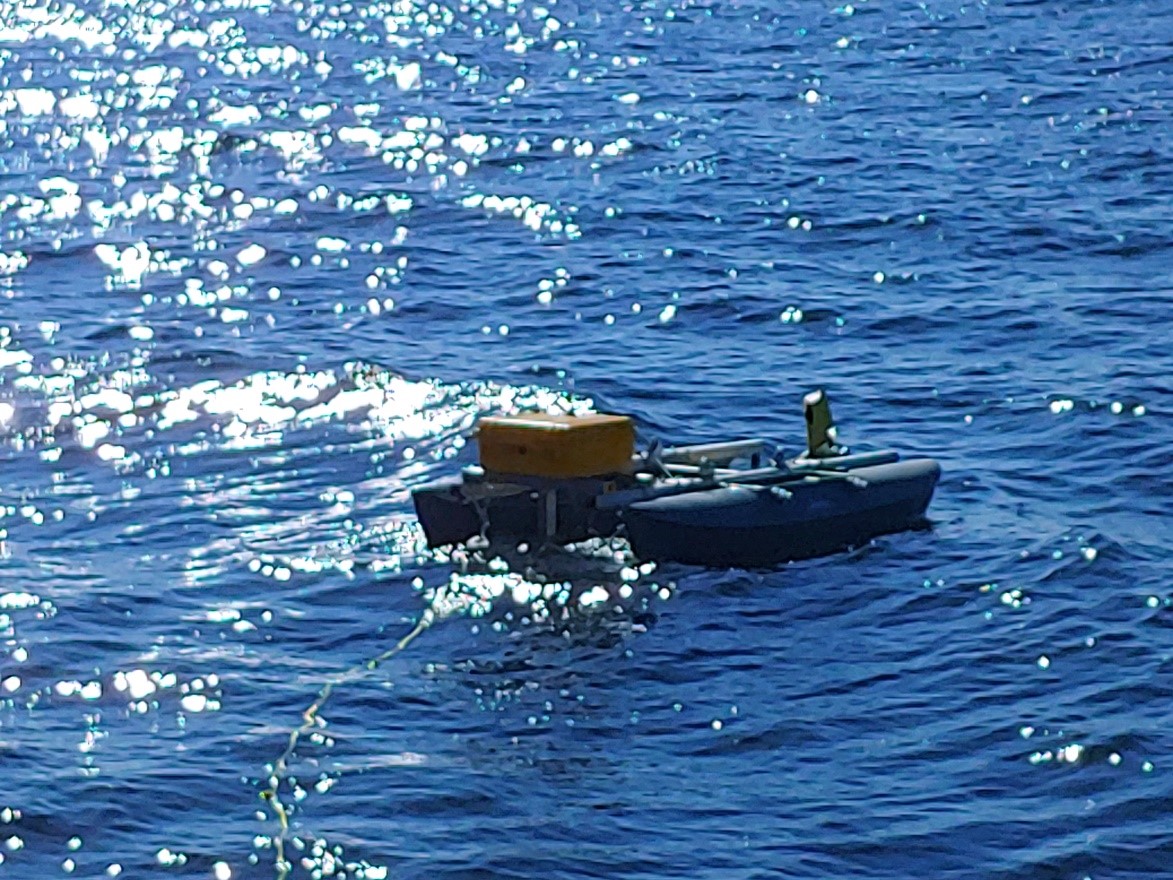 Deployed and connected to the R/V Hogarth by a tether line, the calibration float holds the glider partially submerged while the EKMini echosounder is calibrated.

Dr. Christopher Taylor from the National Centers for Coastal Ocean Science at NOAA's Beaufort Laboratory, said, “This collaboration between USF, NOAA, FIU, UW, Teledyne and Kongsberg Maritime is significantly advancing the tool with enhanced echo sounding aided by remote communication and near-real-time indicators of the presence of fish and plankton in the water column.  All of these results are obtained simultaneously with the ocean chemistry and physical measurements.”

The hull-mounted echosounders on the Hogarth and glider will be used to acoustically map micro and macro fauna on the Gulf of Mexico during cruises planned for spring and summer 2021.

To obtain calibrated biomass data, a calibration of the sonars is needed using a specialized golf ball-sized sphere made of tungsten carbide.

For calibrating the vessel mounted sonars, the sphere is lowered beneath the ship using wire line spooled from 3 outriggers (like deep sea fishing tackle), effectively creating an inverted tripod with its apex below the vessel directly under the sonar transducers.  My role for the day, other than snapping a few photos, was to work the outrigger on the port side, which just so happened to be the shady side of the boat and, on this particularly chilly December morning, put my Floridian version of winter wear to the test!  A few opportunistic trips to the sunny side of the boat, however, thawed me back to homeostasis as I lent a hand to fellow graduate student Garrett Miller who scrambled back and forth between the two reels on the starboard side. 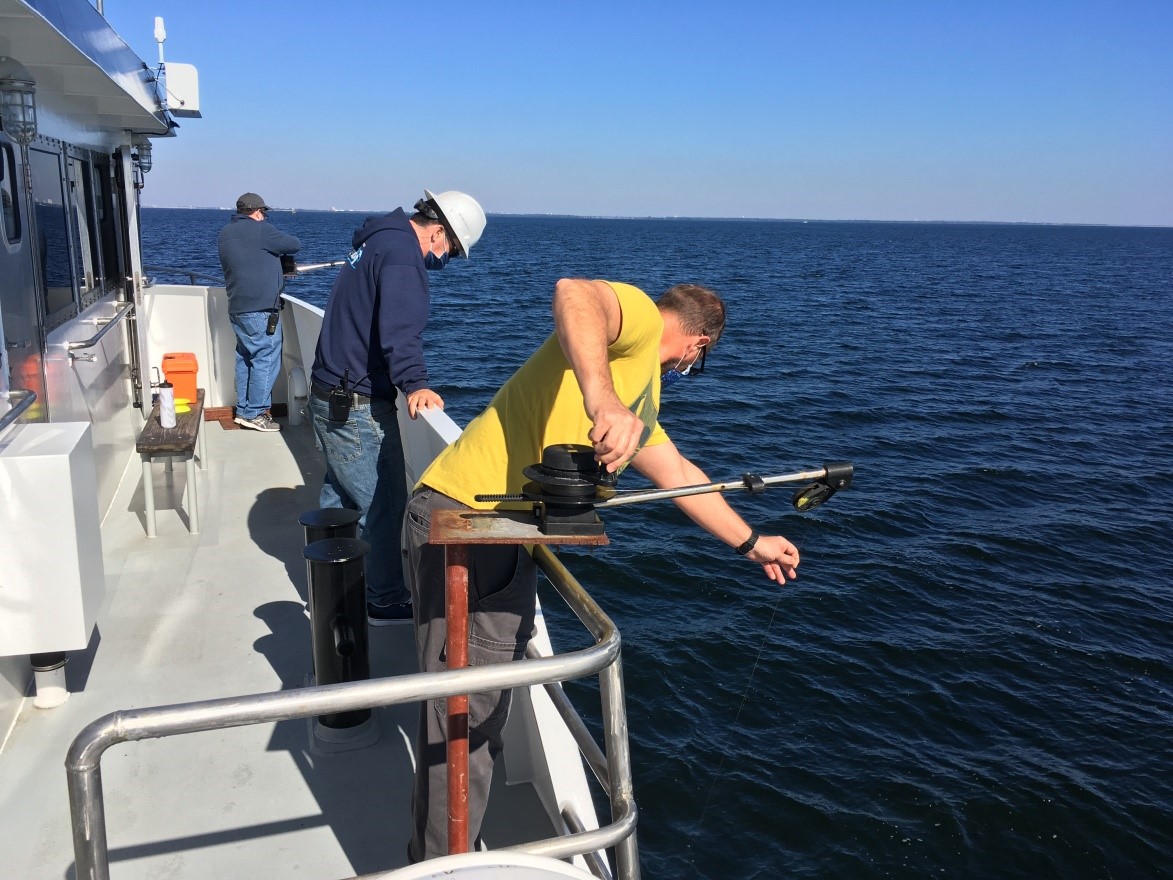 Eddie Hughes, Co-Chief Scientist (background, left), and Andrew Warren, FIO Ship Operations, do a bit of puppeteering of the wires holding the calibration sphere while Captain Brendon Baumeister looks on.

Manipulating the tripod of wire to position the small calibration sphere is an interesting undertaking.  Eddie Hughes, co-chief scientist on the cruise, radioed short commands to Miller and me (“Let out a half reel” “Take in a quarter reel”) based on what the instruments showed on a monitor in the ship’s science lab.  As the sphere gets closer to the ideal calibration position, the tripod workers become something like marionette puppeteers.  The “puppet show,” as they call it on the ship, involves very slight movement of the wires by hand to get the sphere into the final calibration position.

As the wire-adjusting began to wrap up, Lembke and Alex Silverman, COT Research Engineer, assisted the FIO crew in deploying the glider, which had been fixed to a custom made, dual-pontoon structure that would allow it to float at the surface with the EKMini submerged below.  When in operation in the ocean by themselves, the gliders dive and rise between the surface and the seafloor, using wings to propel them forward.  Dr. John Horne, Director for the Cooperative Institute for Climate, Ocean, and Ecosystem Studies at the University of Washington explains, “The construction and testing of the new calibration frame with real-time data transmission enables a whole system calibration of the echo sounder and its platform, independent of the support vessel, which is a critical next step in the addition of active acoustics to a glider.  The calibration frame and communications system has the potential to become the standard for glider-based acoustics throughout the world.” 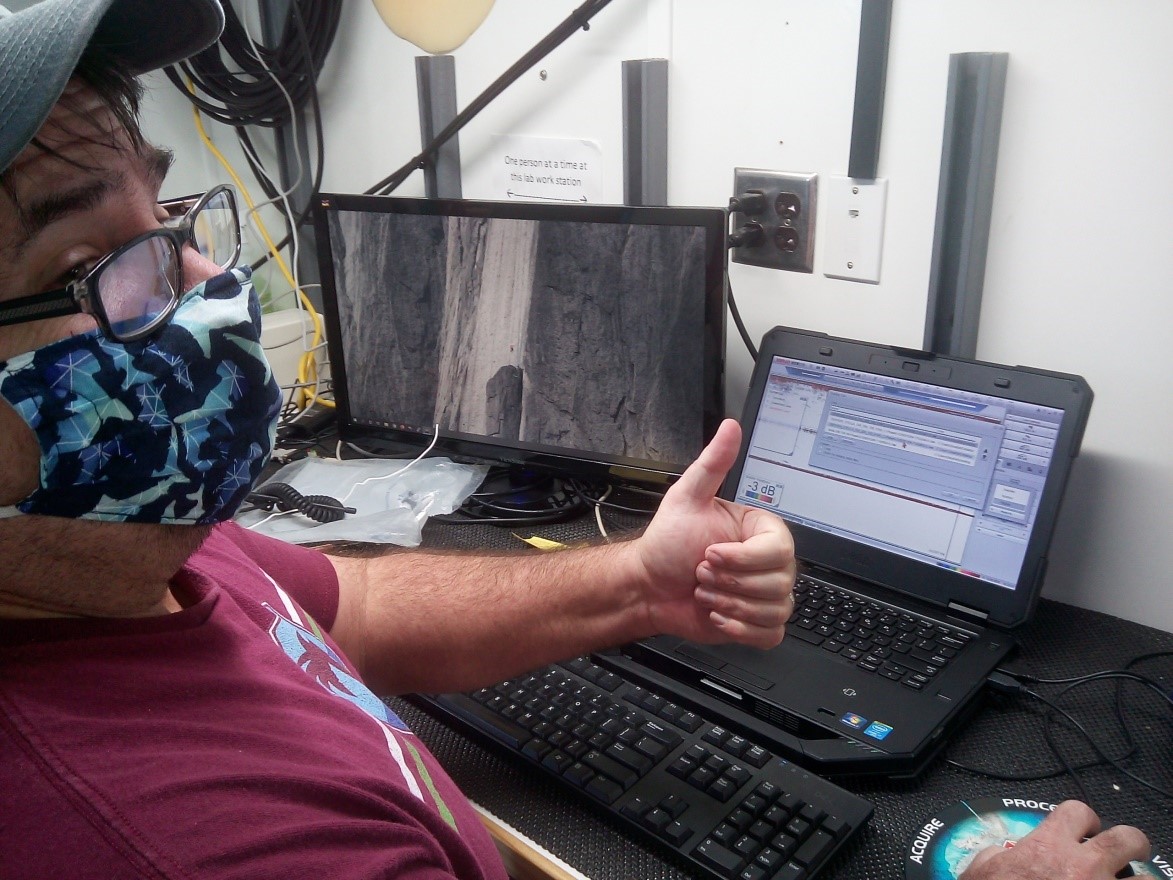 Eddie Hughes gives the thumbs up to the camera, indicating desired calibration readings.

Fixing the glider to the calibration float at a 26 degree angle to mimic the dive cycle during deployment (allowing the sonar transducer to be focused perpendicular to the seafloor), the calibration sphere was attached to the float so that it dangled about 6m below the transducer. The glider’s echosounder then began collecting acoustic data which were used to perform a successful calibration in the SIMRAD EK80 software.  The mild wave action on the bay rocked the float and glider just enough to allow the sphere to migrate between the split beams of the sonar for an ideal calibration.

The calibration float was recovered by its tether rope and we headed home to the College of Marine Science in Bayboro Harbor.  Co-Principal Investigators on the glider-based EKMini echo sounder project chimed in with praise for the free-floating calibration method. 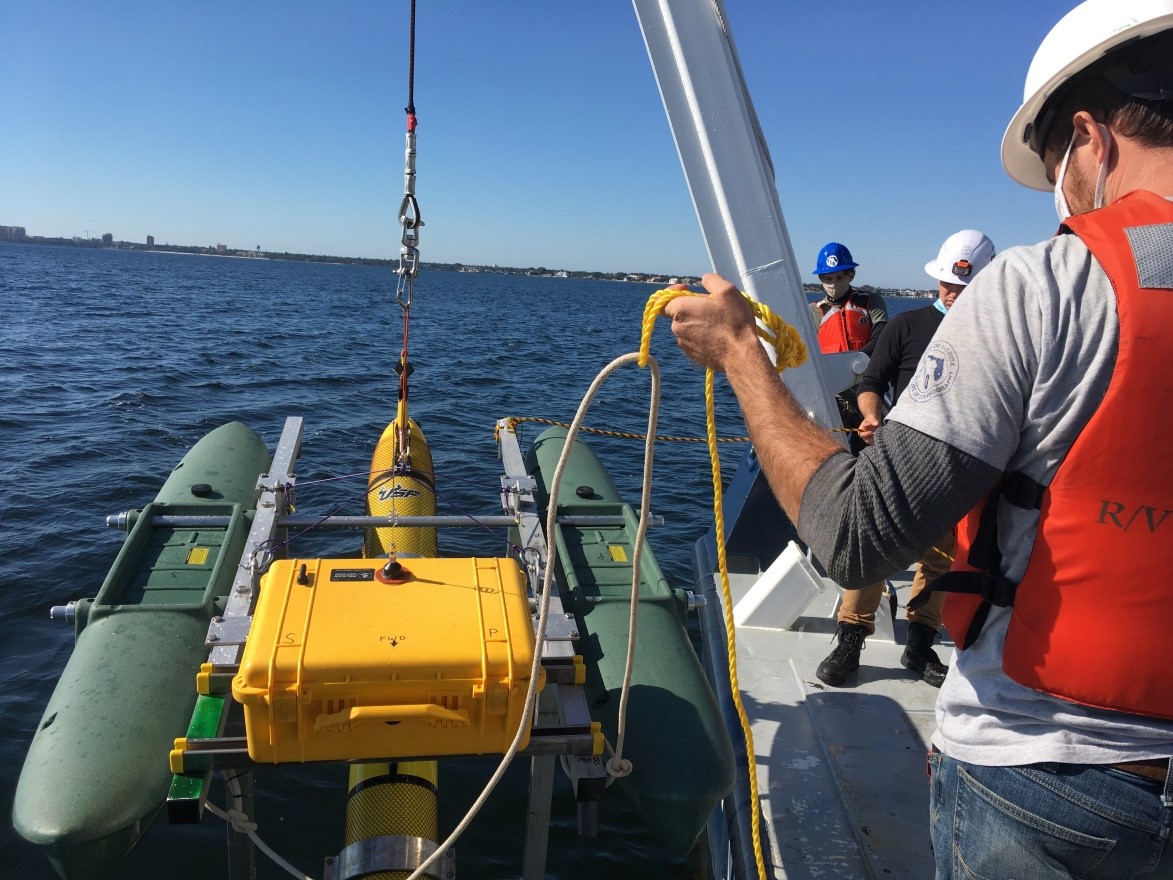 After the calibration float was retrieved by its tether, the FIO crew hoisted it aboard and prepared for our return to Bayboro Harbor.

“Calibration of echosounders has been one of the last challenges for un-crewed or remotely controlled systems and has typically been restricted to a controlled environment or tank.  Here, we've returned the glider to a more realistic environment and are able to calibrate the system in the ocean, exploiting the glider remote communication and data visualization tools developed by COT and USF,” said Taylor.

Thinking broadly of future applications for the technology, Dr. Kevin Boswell, Associate Professor at Florida International University, said this work will allow more accurate estimations of macro and micro fauna biomass of the oceans and in particular the Gulf of Mexico.  “We can now take these sensors to greater depths and get much closer to the animals of interest while minimizing the direct interactions with animals,” He said.