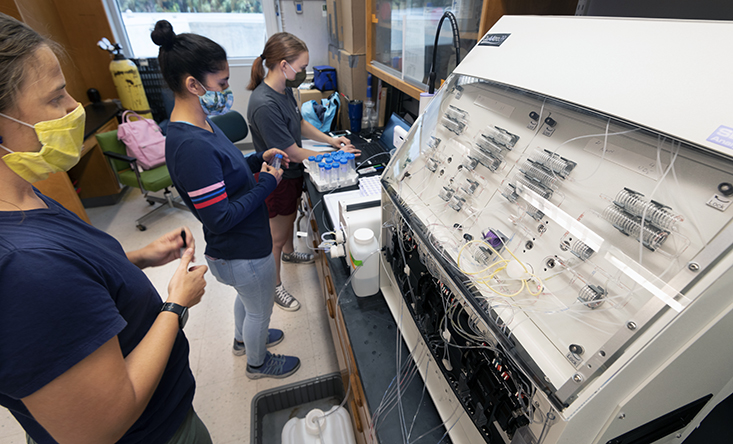 A recording of today’s media opportunity, along with b-roll and photos of researchers and other assets for media use are available here.

ST. PETERSBURG, Fla. (May 24, 2021) –  University of South Florida College of Marine Science researchers today shared their initial findings of how the Tampa Bay ecosystem has responded to the controlled discharges of nutrient-rich wastewater released from the retired Piney Point fertilizer processing plant.  The scientists launched their first research cruise on April 7 and have returned to the water several times since.

The field team, led by USF chemical oceanographer Kristen Buck collected water and sediment samples from a suite of stations in the vicinity of Port Manatee and locations beyond the affected area. The sampling and subsequent data analyses confirmed that the phytoplankton responded quickly to the nutrient pulse, but the assemblage was dominated by diatoms and not toxic phytoplankton responsible for red tides.  The algal bloom has since dissipated. The end of the algae bloom was confirmed in satellite imagery analyzed by physical oceanographer Chuanmin Hu (see “Hu satellite imagery” here).

The team’s sampling efforts were guided by a model provided by physical oceanographer Bob Weisberg.  The model forecasts the movement of discharged water and its constituents based on tides, winds and river input. A summary of this model and its results are included here (see Word doc here, “Piney Point Effluent Concentration Modeling”).

“Although the residency time of water in Tampa Bay is on the order of months and the bay flushes slowly, the discharged water seems to have been diluted pretty quickly,” Weisberg said.

Many questions remain and any longer-term impacts on the ecosystem remain unknown. For example, biological oceanographer Steve Murawski collected fish to understand any impacts to fish health, but those samples will take longer to process.

“We will continue to work with state agencies leading the response effort and other local partners to sample water and sediments potentially affected by the discharge to better understand the transport, transformation, and fate of its chemical constituents, nitrogen and phosphorus in particular,” Buck said.

The USF research team collected water samples, surface sediments and fish from Tampa Bay and Port Manatee. In total they led five research cruises in April in partnership with the Florida Institute of Oceanography (FIO) aboard the R/V Weatherbird II, performed additional shore-based sampling on April 12-13 and partnered with the Florida Fish & Wildlife Commission (FWC) for small-boat sampling efforts on April 21 and April 29. Additional research cruises are tentatively scheduled for the end of May and late June.

The full suite of the data being collected at Piney Point, including USF’s data, can be viewed on a dashboard maintained by the Tampa Bay Estuary Program.

Use of the ship in the early days was made possible by FIO. USF is working with partners at Florida Fish & Wildlife Conservation Commission, Eckerd College, Florida State University, Woods Hole Oceanographic Institution, and more. 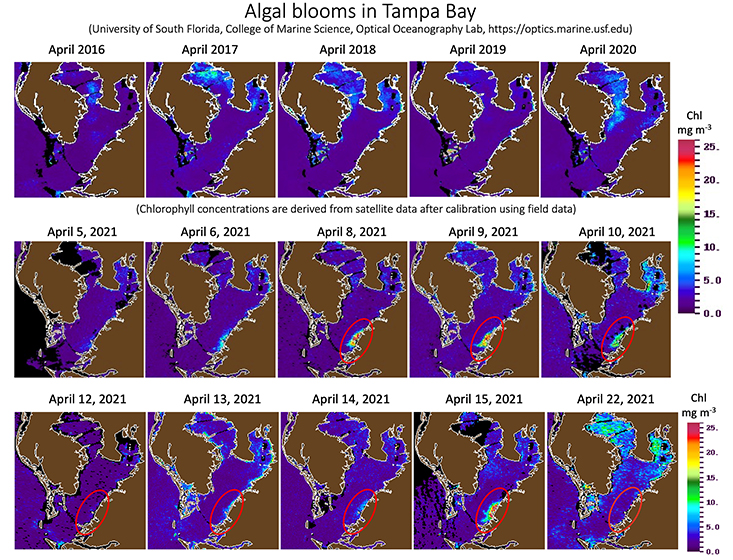