In late May, forecasters at NOAA’s Climate Prediction Center signaled a tempestuous 2022 Atlantic hurricane season. Warm water fuels tropical storms and the Atlantic Ocean was on track for another scorcher. Meanwhile in the Pacific Ocean, La Niña was creating atmospheric conditions conducive to Atlantic storms. Those factors combined to give NOAA confidence in predicting the seventh above-average season in a row.

It took three months for the first hurricane to form, but the slow start belied the record-breaking storms to come.

The 2022 season ended on November 30 with a total of 14 named storms, eight hurricanes, and two major hurricanes — a near-average season in terms of activity, according to NOAA. But this season was one of the most destructive on record, and it underscored the Flood Hub’s mission to improve flood forecasting in Florida.

Hurricane season is over, but its impacts remain across the state. A look back offers insight into Florida’s future flooding risks and opportunities for resilience.

In September, roaring winds from Category 4 storms Fiona and Ian whipped off roofs, toppled trees, and tugged down power poles. But as is often the case with tropical storms, water wrought the worst of it. Fiona caused widespread flooding from Puerto Rico to Quebec. Ian brought record storm surge to southwest Florida and catastrophic flooding across the state. In November, waves from Nicole, a late-season Cat 1, crumbled sea walls of beachfront homes. 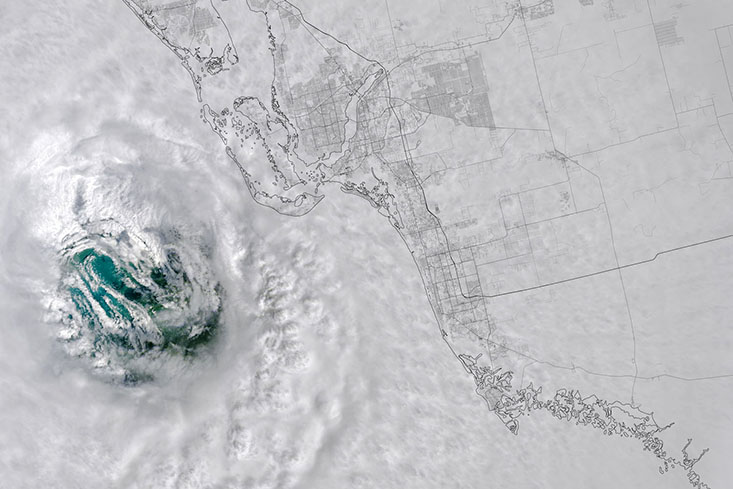 As storms make landfall, focus tends to be on the “cone of uncertainty,” which the National Hurricane Center uses to depict a storm’s probable path. But the cone can be deceptive.

“The cone just tells you where the landfall might be, but it doesn’t tell you the size and full impact of a storm,” said Peter Sheng, a professor at the University of Florida’s Department of Civil and Coastal Engineering. That means people outside the cone may fail to grasp their risk by viewing the cone alone.

“Ian turned out to be a very large hurricane,” Sheng said. “The sheer size of the storm meant it impacted a large area of the state.”

The National Hurricane Center’s cone of uncertainty for Hurricane Ian from September 23 to October 3. The cone depicts the projected path of a storm but does not show a storm’s full impact. Credit: NOAA’s National Weather Service.

Ian’s inland flooding proved to be a major issue for Floridians living in the center of the state. In southwest Florida, the Peace River rose to a record 24 feet — well above the 11-foot threshold for a flood event — and sent water rushing over its banks and onto properties. Nearby, the flooded Myakka River forced weeks-long road closures. The Kissimmee River in central Florida and St. John’s River in northeast Florida swamped neighborhoods and required high-water rescues.

Many people saw firsthand the impact of compound flooding, in which multiple sources inundate an area in a short period of time. High tide, storm surge, and extreme rainfall combined to drown coastal properties, while rainfall and river flooding drenched inland communities.

“Compound flooding can be extremely destructive, but difficult to predict,” said Tom Frazer, executive director of the Flood Hub and dean of the University of South Florida College of Marine Science (CMS). “It’s our goal at the Flood Hub to better understand all aspects of flooding including how factors like sea level rise, storm surge, and rainfall runoff can contribute to severe flooding events.”

It was already a soggy September for many areas of central and south-central Florida — then Ian arrived and dumped more than 20 inches of rain in just a couple days. Some areas saw 1-in-1,000-year rainfall events. Flooding was made worse by saturated soils that couldn’t soak up the storm’s excess water.

A 1-in-1,000-year event is an event that has a 0.1% chance of happening in a given year. These “return periods” are based on historical data and estimate the average time between events. However, experts agree that Florida’s precipitation patterns are changing and as a result, these intervals need updating.

“Ian brought extremely rare rainfall to central Florida — much higher than what we have historically experienced in such a short amount of time,” said Jayantha Obeysekera, director of the Sea Level Solutions Center at Florida International University and chair of the Flood Hub’s working group on rainfall projections and change factors related to the depth, duration, and frequency of extreme rainfall events. “We’re starting to see that past rainfall conditions are not always reliable indications of the future. We need to revisit the data and projections we currently rely on.” 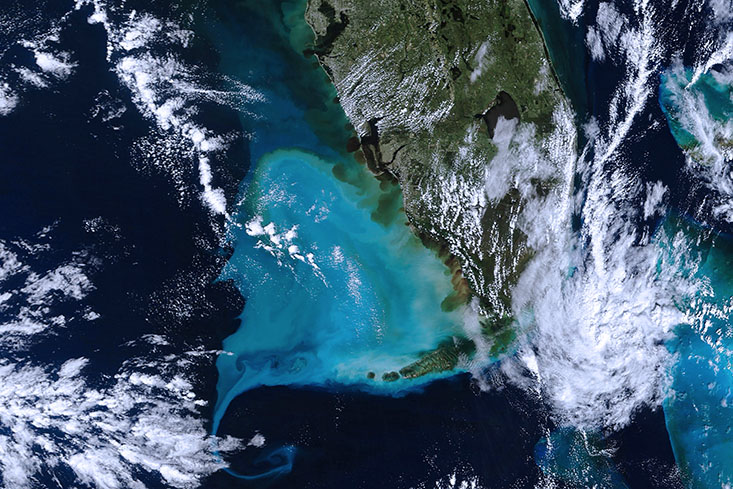 Hurricane Ian brought historic rainfall and flooding to Florida’s interior. In the days after the storm, discharged water from rivers and estuaries could be seen from satellite. Credit: NASA’s Earth Observatory.

Questions Obeysekera intends to examine in the working group: Are rainfall averages and extremes changing? What sort of variability should we expect in the future? Have we already entered a new normal as it relates to rainfall in the Sunshine State?

Answers to these questions are critical when designing stormwater drainage systems and implementing other water resource projects. Historical data are unreliable if they don’t track with current and future conditions.

“If we only rely on historical data and don’t consider the potential for more frequent and intense rainfall events in the future, our current and future water resource projects will underperform and we’ll have more frequent and extreme flooding,” Obeysekera said. “Moving forward, we will need to use climate models that account for the changing environment to predict future extreme rainfall events.”

Predicting changes in rainfall patterns is complex but can help improve flood forecasting since extreme precipitation increases the frequency and intensity of flooding. Ian may have had 10% more rainfall due to climate change in part because warmer air holds more moisture. During the storm, areas saturated by rain earlier in the month were subject to additional flooding — and some of those areas saw further inundation when Nicole made landfall a little over a month later.

Value of high-resolution data and modelling

In the days leading up to Ian’s landfall, as residents in Tampa Bay prepared for the double-digit storm surge predicted by the National Weather Service, a model from the USF CMS Ocean Circulation Lab used localized data to forecast just the opposite. Rather than feet of water rushing into the bay, the models predicted feet of water would flush out as winds pushed water away from the coast.

These predictions proved spot on thanks in large part to high-resolution data on local conditions. One of the models, the Tampa Bay Ocean Circulation Model (TBCOM), uses data collected around Tampa Bay over decades to inform its forecasts.

“We’ve developed and refined these models over many years,” said Bob Weisberg, professor emeritus and former director of the Ocean Circulation Lab. “During Ian they proved their value for storm-surge prediction in the region.”

TBCOM and other high-resolution models show how factors such as point of landfall and direction of approach influence storm surge, Weisberg added. Those variables largely determined Ian’s impacts on the coast.

With appropriate data, modeling tools can be deployed during a storm’s approach to predict the impacts of various storm tracks. While the National Weather Service operates a national flood forecast model, FIU’s Obeysekera said Florida’s unique topography, complex water management system, and hydrology mean the model is not always appropriate for the state. He pointed to rapid modeling tools — which quickly crunch data and generate projections — as relatively simple and nimble ways to predict storm impacts.

One such model operated by Sheng’s team at UF can be used to predict storm surge in southwest Florida’s Collier County. The model was trained using data from hundreds of simulated storms such that “when a real hurricane comes, we input the storm’s pressure deficit, size, forward speed, and approximate landfall location, and the models creates an inundation map in just one minute,” Sheng said. He added that during Ian, his team’s Rapid Forecasting System accurately predicted four to ten feet of inundation in parts of Collier County. 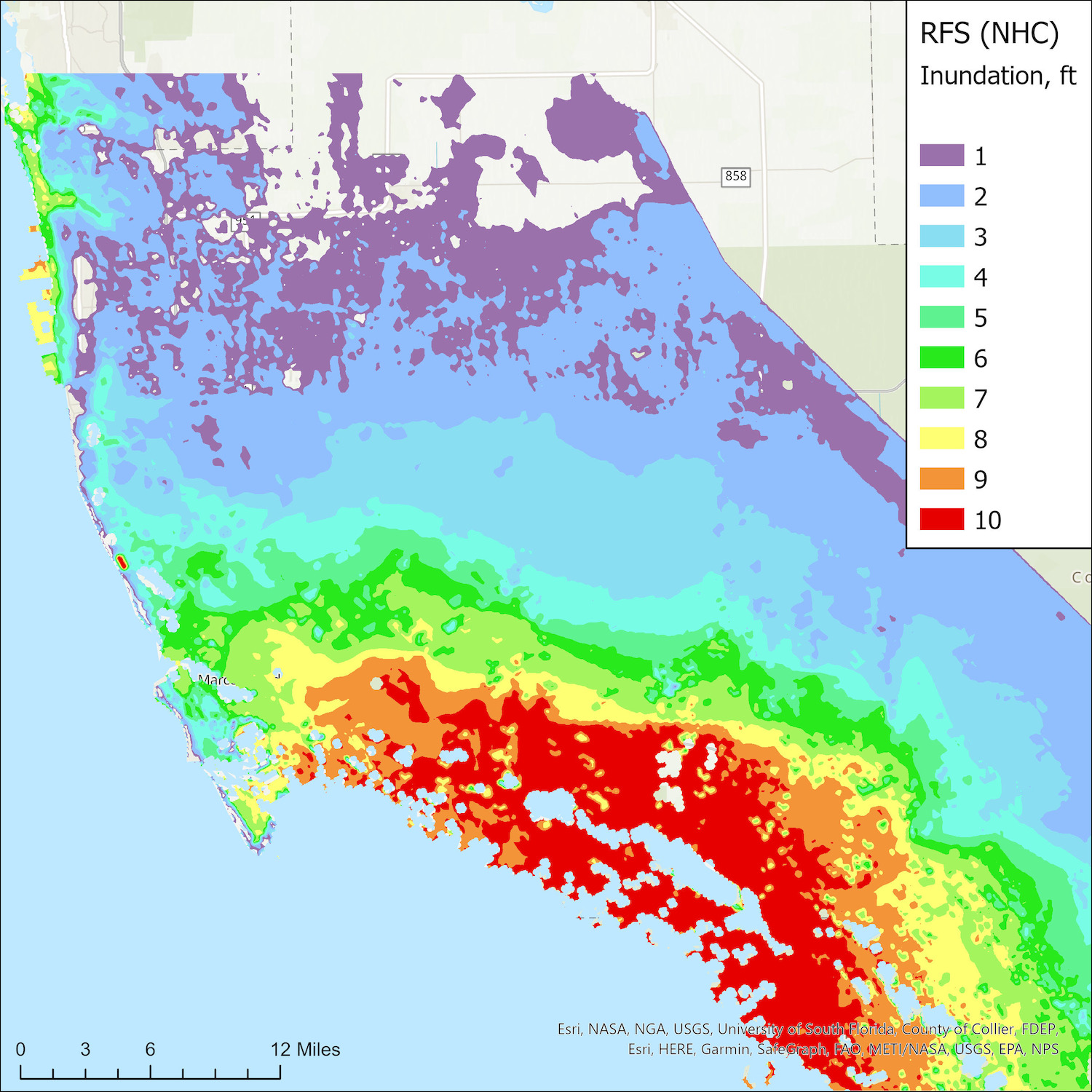 Inland communities benefit from these models, too. As the resiliency officer for the South Florida Water Management District, Carolina Maran uses data with her team to refine models, measure the effectiveness of water resource projects, and manage water levels from Orlando to the Florida Keys.

“We invest a lot in data collection,” said Maran, a member of the working group on rainfall projections and change factors related to the depth, duration, and frequency of extreme rainfall events.

One of her takeaways from the 2022 hurricane season is the value of high-resolution data and improved models to predict how flooding will impact residents and businesses, including agricultural operations.

“We use data throughout the season to help answer questions about how best to manage water levels,” she said. “Florida is a complex system. Advanced modeling enables us to integrate and interpret all the data we’ve collected, and to identify areas most vulnerable to flooding.”

Hurricanes highlight vulnerabilities. High-resolution data and modelling can help prepare communities for the flooding impacts that often accompany severe storms. These tools proved their value this hurricane season — but they’re useful the rest of the year too. Through improved forecasting, the Flood Hub will help Floridians adapt to and mitigate flooding risks year-round.