Keeping our eyes on hurricanes 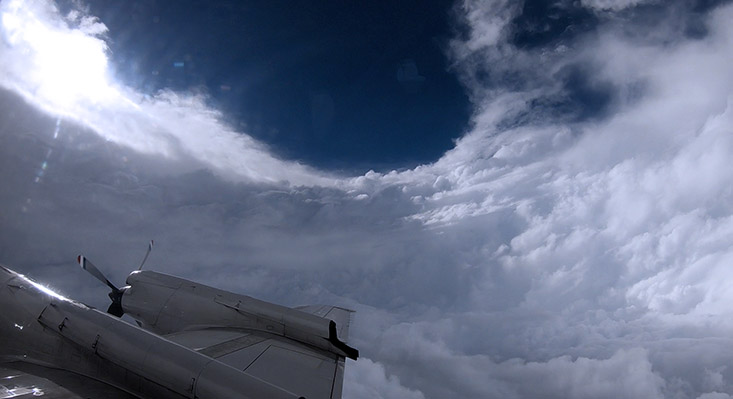 Image above: The view from inside Hurricane Florence in 2018. Credit: Nick Underwood/NOAA

Chad Lembke prepares for peril when his team launches gliders into the Gulf of Mexico. Ship and shark strikes have maimed these uncrewed submersibles, which collect a suite of marine science data. A boater with more strength than sense once lifted one of the 150-pound, torpedo-shaped drones right out of the water and toted it home like a mechanical trophy fish. Lembke later recovered the glider using GPS to pinpoint its location.

“We never really know what to expect,” said Lembke, a project engineer at the Center for Ocean Technology at the University of South Florida College of Marine Science (USF CMS).

Some perils are best avoided. Others are part of the plan.

Next year, the USF CMS glider operations team will hunt natural hazards as part of a hurricane monitoring program funded by the National Oceanic and Atmospheric Administration (NOAA) and in partnership with the Gulf of Mexico Coastal Ocean Observing System (GCOOS). The goal is to collect data on temperature and salinity in the Gulf to help modelers better forecast the intensity of storms.

Gliders are semi-autonomous drones that dive and ascend by pumping water in and out of their ballasts, using their wings to propel forward. They collect data from the ocean surface to the seafloor, and are capable of traveling hundreds of miles on months-long deployments. Each time a glider surfaces, it beams back some information about ocean conditions via satellite in near-real time. The rest of the data are retrieved when the gliders are recovered after a mission.

Scientists use data gathered by gliders from USF CMS and other institutions across the globe to better understand our ocean. 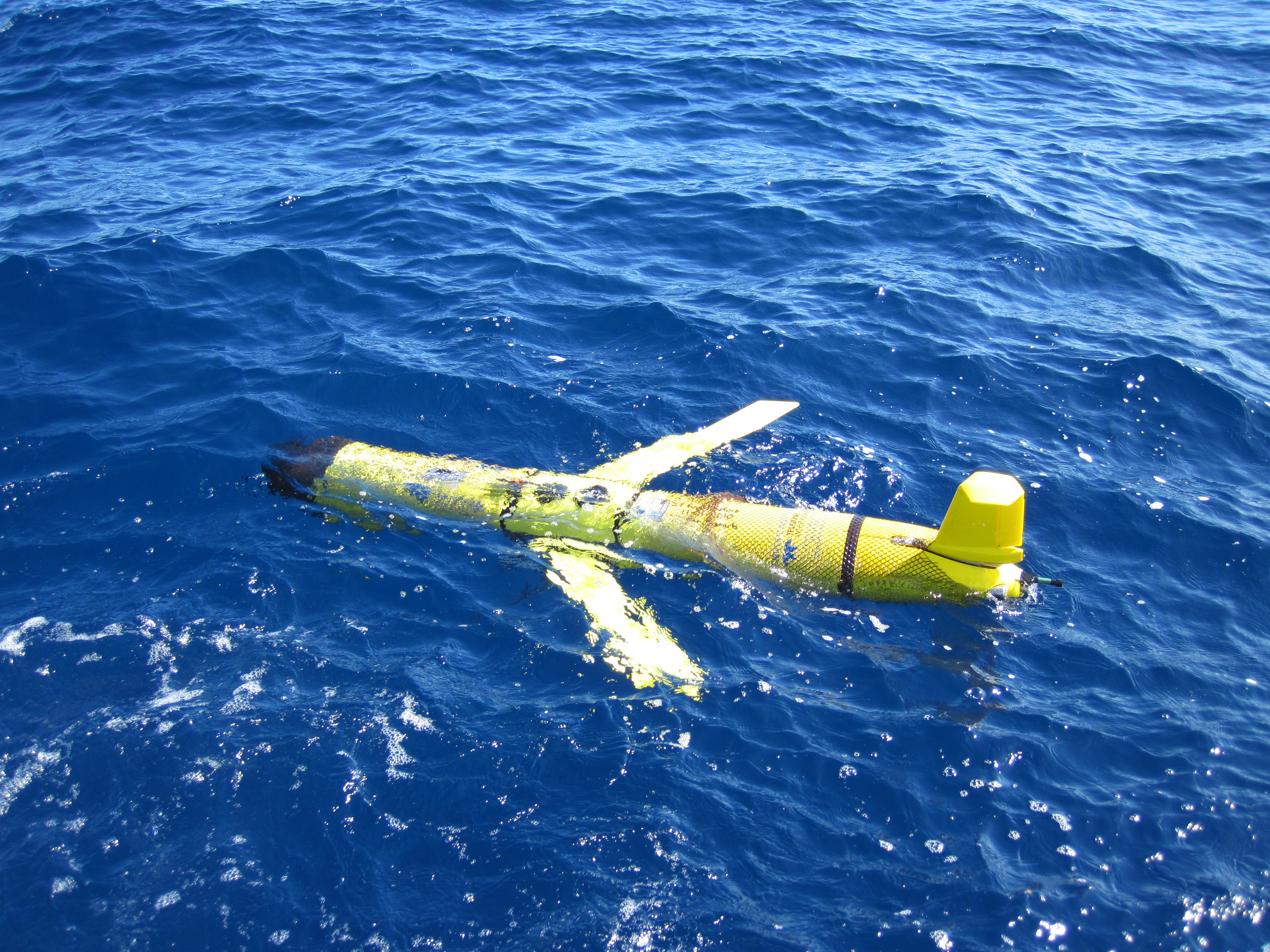 During months-long deployments, gliders gather biological, physical, and chemical data on things like fisheries, currents, and nutrients in the ocean.

“These glider platforms are like pickup trucks,” Lembke said. “The more sensors we can put on them the better. We can collect all kinds of data as long as it doesn’t interfere with the main mission.”

For the past few years, the main mission of the USF CMS glider operations team has been to collect data for red tide research. Along the way they’ve gathered biological, physical, and chemical data on things like fisheries, currents, and nutrients.

In the case of hurricane monitoring, “temperature and salinity are two major parameters for storm intensification,” said Jorge Brenner, executive director of GCOOS, which tracks and maps gliders deployed in the Gulf of Mexico. 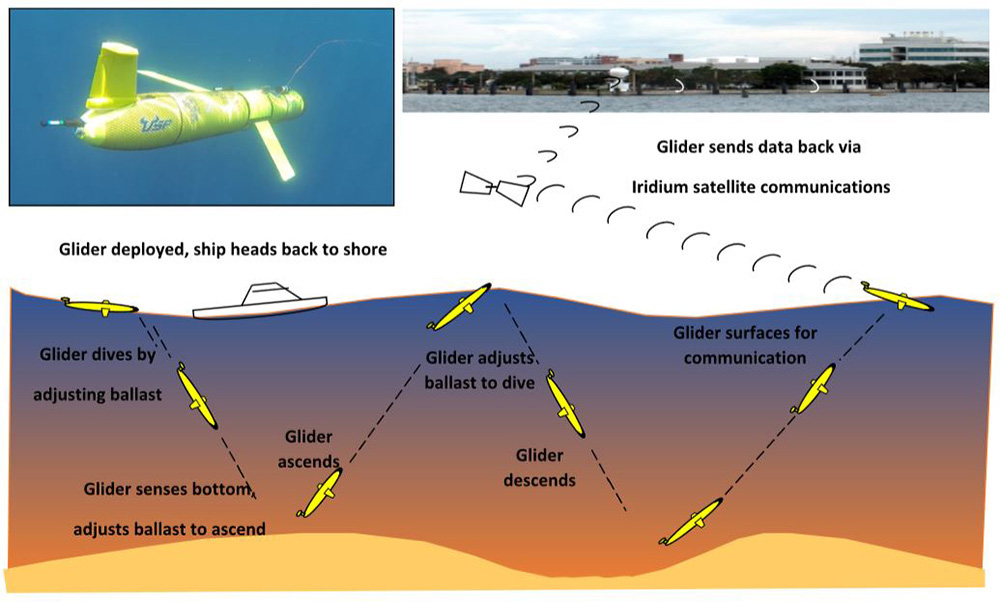 Gliders provide data to modelers in near-real time, making them valuable for forecasting the development of tropical systems.

Warmer waters — especially when that warmth is deeper in the water column — give tropical systems greater potential to become stronger hurricanes. Meanwhile, research has shown that low salinity can also intensify hurricanes.

Monitoring these conditions have added importance from June 1 to November 30 — the Atlantic hurricane season — when hurricanes are most likely to form. The ability of gliders to descend deep into the ocean and quickly transmit data back to shore makes them valuable for forecasting these tropical systems.

“The goal of this program is to provide data to modelers to see if the ocean is conducive to the development of the storms,” Brenner said. “By deploying gliders ahead of time, we’ll be prepared for when the hurricane arrives and able to collect important data before, during, and after the storm.”

Scientists predict hurricanes will increase in intensity as sea level and temperatures rise due to climate change. Although the USF CMS glider operations team has collected temperature and salinity data for years, NOAA’s funding will support Lembke and his colleagues as they continue to gather key ocean data for forecasting a storm’s approach.

For Nick Underwood, a graduate student at USF CMS, hurricane hunting began as a turbulent in-person experience. He took his first flight as an aerospace engineer for NOAA’s Hurricane Hunters in 2016 when they flew into Category 4 Hurricane Matthew.

“It was an eight-hour flight, and for six hours I was sick to my stomach,” Underwood said. “But as soon as I got back, I realized I wanted to do it again.” 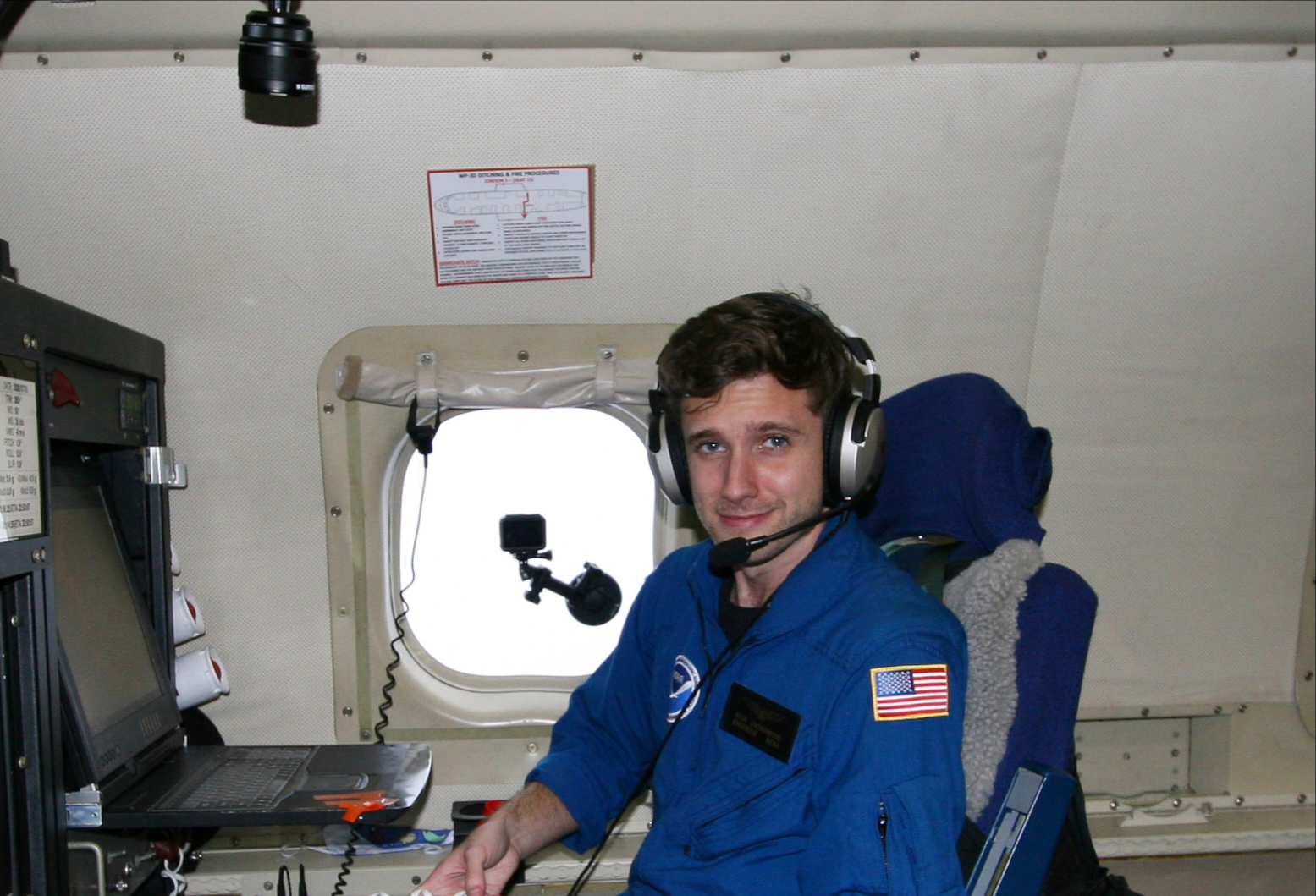 Underwood was onboard as an observer. On later missions, he deployed instruments that collect real-time data inside storms and help hurricane modelers refine their forecasts.

The multitool in the Hurricane Hunters’s toolkit is called a dropsonde. Dropsondes are small devices that parachute from the plane, recording temperature, pressure, and wind speed and direction. Underwood has launched them by the dozens per storm. When dropsondes reach the waves, they transmit data back to the Hurricane Hunters, who send it to the National Hurricane Center along with scores of other data gathered during the flight.

“These planes are pretty much flying research labs,” Underwood said. In addition to dropsondes, the planes have equipment such as stepped-frequency microwave radiometers for measuring wind velocity, and real-time doppler radars, which provide data on the structure of storms by scanning from the sea surface to cloud tops.

“With these data you can build 3D models of storm cells and nastiness,” said Underwood. “It’s like taking an MRI of a storm.”

All of the data inform the seemingly whimsical spaghetti plots that visualize a hurricane’s predicted paths as colored noodles.

Underwood’s graduate research with his advisor, Don Chambers, involves validating data collected by air-launched autonomous micro-observers (ALAMO), which, like dropsondes, are launched from planes and, like gliders, collect temperature and salinity measurements of the ocean.

He recently started a new role for the Hurricane Hunters as a programs and integration engineer, in which he works with scientists to get their instrumentation aboard his team’s aircraft.

“People rely on the data we collect to accurately predict the path of these storms,” Underwood said. “The better we can understand the processes inside hurricanes, the better we can warn people ahead of time about their approach. At the end of the day, we’re out there because it impacts lives.”