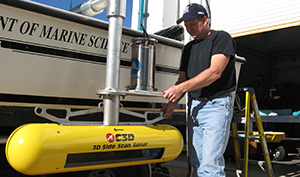 Jim was born in Buffalo, New York and grew up in western N.Y. on Lake Erie. At a very young age he had passion for two things one was ice hockey the other was motorcycles. The long cold winters were not conducive riding motorcycles so ice hockey filled that void.

The early teen years found Jim working with his stepfather at a marina on the Niagara River where he was the manager. Jim needed to fund his motocross career and helping out at the marina was a good source of income. The time spent there taught him how to repair just about anything and to use creative thinking when dealing with problems and the public. He also helped his stepfather at home with a small business repairing small outboard motors.

In high school Jim took welding and machine shop classes, and continued with his motocross career, as well as working at the marina and home.

Jim was traveling quite a bit and decided to turn his passion into a profession and became a pro motocross racer at the age of 18. Traveling the United States and living his dream until injuries and finances became a problem and the fun wasn’t there anymore, Jim settled down in Palm Harbor, Florida in the mid-eighties.

Jim found work at Gulfwind Marine in Clearwater and worked there as their field service advisor for five years. Jim left this employment to start his own business and was very successful at this venture. During this time Jim met a wonderful lady and asked her to marry him, she said yes and they have been married for thirty years, they have two adult age sons.

Jim started working at the College of Marine science in 1994 working as an apprentice under Jim Mullins and Rich Schmid, using his welding and machining skills learned in high school, he was a great fit right from the start. Over the next ten years Jim acquired a passion for the marine science community and their research initiatives, and acquired a very unique skill set in this environment. The experience of working with two grizzly veterans of the trade were priceless.

Jim took over as manager of the machine shop in 2004 and has run a very successful operation since, assisting faculty, students, staff, and other associated institutions. Jim plans to stay at CMS until he retires, he still enjoys coming to work every day. 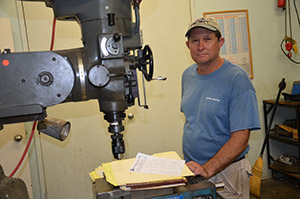 Guy was born in Honolulu, Hawaii and then spent the next fifteen years cruising with his parents on their 36’ sailboat.  They sailed to various ports on the west coast of North America, the Caribbean Sea and Panama before settling in New Zealand, his mother’s homeland.  It was there that he completed a four-and-a-half-year apprenticeship as a machinist, then moved to the United States, his father’s homeland.

Once settled in the U.S., Guy crewed on various yachts cruising the U.S., Bahamas and Caribbean as an engineer and accumulated the necessary sea time to obtain his U.S.C.G. 1,600-ton Ocean Masters license.  He served as the 1st Mate aboard Florida Institute of Oceanography’s Research Vessel Suncoaster for five years before joining the staff of the College of Marine Science’s machine shop in 2004.

Guy is married and lives in St. Petersburg.  He still enjoys boating and traveling as well as adding to his extensive rum collection.  He occasionally reminisces about the days of sailing and calling on interesting ports-of-call but now takes pride in his work and ability as a machinist.