TAMPA, Fla (June 6, 2016) – The University of South Florida (USF) is proud to announce the first recipient of the President A.P. J. Kalam Postgraduate Fellowship, named after the late president of India.

President Kalam was a strong advocate for young people and a passionate supporter of clean energy and energy independence. He visited USF in 2012 and is remembered affectionately by the university and the vibrant Indian heritage community in Tampa Bay, Fla.

In December 2015, USF established a fellowship in his honor that recognizes laudable students who graduated from an Indian university, have exceptional academic credentials, and a passion for the STEM fields of study. Applicants must have demonstrated experience in his or her discipline, research productivity, and made professional contributions and achievements to the field.

The Kalam Fellow will receive $18,000 tuition per year beginning the fall 2016 semester. The Provost's Office will pay a nine-month stipend for the first year with the department/college contributing a teaching/research assistantship for up to an additional three years. 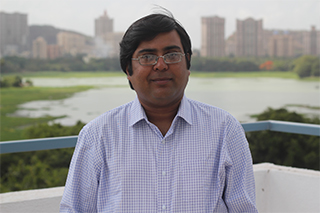 Avijit Sengupta, a design researcher from Kolkata, India, demonstrated all of the Fellowship qualifications and more. A graduate from the Indian Institute of Technology Bombay, a public engineering and research institution located in Mumbai, Sengupta spent three years working at the Center of Social Media Innovation for Communities at the National University of Singapore (NUS). He has conference publications in South Korea, New Zealand and the USA (twice with the American conference on Information Systems).

"To be the inaugural recipient is an incredible honor. It means taking more academic responsibilities and trying to fulfill them for furthering my knowledge and abilities," said Avijit Sengupta. "It means always remaining self-motivated and pushing the boundaries of scientific knowledge, which I aim to do while a student at the USF Muma College of Business."

For Sengupta, it was the academic freedom to pursue his research interests and high-quality cohort of faculty members with diverse expertise that attracted him to pursue his doctoral degree at USF.

"I really like the nature of the PhD program offered by the Muma College of Business. It brings together passion for technology, behavioral science theory, scientific methodologies, independent thinking and design science principles to allow the student to address varied research topics," explained Sengupta.

Sengupta credits the patronage of research—which involves fundamental intertwining of technology, design, information and society—as well as the global research environment that the university has been fostering to provide him with the perfect research platform in a way that other existing universities wouldn't have offered.

"With more than 70 applicants to the Kalam Fellowship, there was much deliberation to select one recipient who exemplified all that President Kalam valued and would also contribute to the university. We are honored to welcome Avijit to USF and I would like to congratulate him once again," said Dr. Roger Brindley, USF System Vice President, USF World .

Dr. Balaji Padmanabhan, a professor and chair of the Muma College of Business Information Systems Decision Sciences department, will be in India this month as part of a USF study abroad program with Infosys and will also present the Fellowship award letter to Sengupta.