USF Named One of the Nation’s Top Producers of Fulbright U.S. Scholars 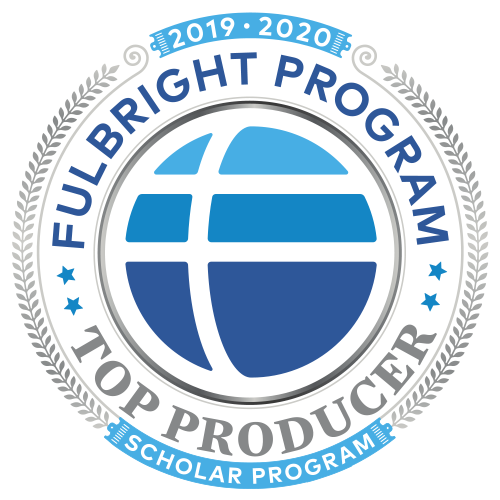 TAMPA, Fla. (Feb. 10, 2020) -- The University of South Florida is one of the top producers of Fulbright scholars in the United States for 2019-20, according to a new list released today by the U.S. Department of State and first published by the Chronicle of Higher Education.

With nine faculty members earning the highly competitive awards, USF is the third highest producing institution in the nation, and the top in Florida.  USF placed ahead of several members in the Association of American Universities (AAU), including Michigan State University, Purdue University, University of Washington and University of California, Berkeley.  The AAU is a prestigious group of the top 65 public and private universities in the U.S. and Canada, which USF aspires to join.

“USF faculty continue their remarkable work building a world-class global university. The fact that every year USF competes with the highest renowned universities speaks to the ongoing and generational efforts of the entire university community. Over time, USF is building a robust and prestigious group of Fulbright faculty,” USF World Vice President Roger Brindley said.

The faculty who receive Fulbright awards are given the opportunity to travel abroad, explore new perspectives, establish new international collaborations and potentially discover new breakthroughs that can have a global impact. These gained insights and experiences are then integrated into their classroom, allowing their students and fellow faculty to mutually benefit and further the development of the USF community as global citizens.  The USF Fulbright scholars represent a wide range of disciplines, including biomedical engineering, education, philosophy and psychology.

In addition to the nine from USF Tampa, one faculty member from USF St. Petersburg and one from USF Sarasota-Manatee were named Fulbright scholars for 2019-20.  Collectively these faculty members are furthering USF’s global reach by traveling to 11 countries across three continents to conduct research and teach. A full list of USF Fulbright scholars from 2019 - 2020 can be found here.

Since its inception in 1946, the Fulbright program has given over 390,000 passionate and accomplished students, scholars, teachers, artists and professionals of all backgrounds and fields the opportunity to study, teach and conduct research, exchange ideas and contribute to finding solutions to important international problems. The global Fulbright network fosters mutual understanding between the United States and partner nations, advances knowledge across communities and improves lives around the globe.