USF Travels to Washington D.C. to Advocate for International Education

Tampa, Fla. (April 22, 2019) – International education is a value that Snow White, Student Programs Coordinator for USF Education Abroad, treasures. After studying abroad twice in Australia and Italy, it became clear to White that her international experiences were key components in her personal and professional growth.

“From personal and professional experience, I can attest to how important international education is for our students,” says White. “Students who have a study abroad experiences get to see incredible parts of the world, learn from other people and cultures, and undergo all kinds of personal growth all while continuing their education. Furthermore, our international students are incredible people who bring so much to our universities and to the United States.” 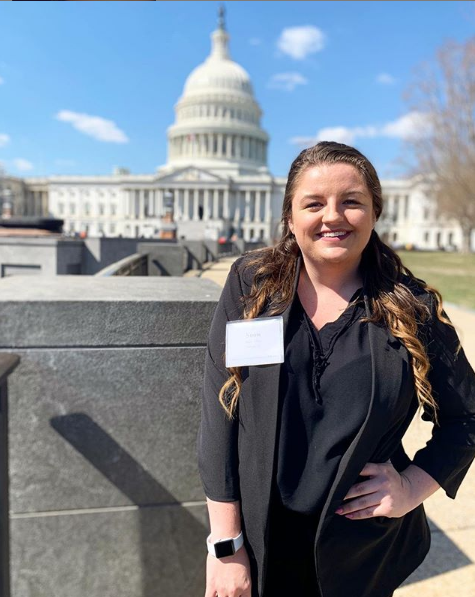 So, when White received a grant from NAFSA, the largest nonprofit association dedicated to international education and exchange, to travel to Washington D.C. and advocate to Congress, she did not hesitate.

White, as well as USFSP International Student Advisor Angelica Rodriguez Jimenez, were among the over 100 advocates reporting to Capitol Hill for the annual NAFSA Advocacy Day to speak up for students and educate Congress on the impact of international education on a local, national, and global scale.

In 2018 alone, international students contributed $39 billion to the U.S. economy and either created or supported over 455,000 U.S. jobs.

Upon arrival, the advocates underwent training on how to best approach the discussion on international education including the value of international students to the United States and the need for more diversity within study abroad. “The NAFSA team did a great job preparing us for our meeting with Congress, so all we had to do was go into the meetings armed with facts they prepared us with, and talk to our representatives about issues all of us are extremely passionate about,” recalled White. “It was a little nerve-racking at first, but realizing that you are the professional in the field and that we are here to educate those who make critical decisions about the future of our students and our organizations made it much easier.”

Following the training, White had the opportunity to meet with staff members of both Florida senators – Marco Rubio and Rick Scott. She also met with Representative Kathy Castor’s office, who represents the district in which USF resides. Requests included social media posts that would be posted in support of including international students within the population as well as legislation that would remove barriers from students studying within the United States.

In addition to supporting international student education within the United States, advocates asked Congress to become cosponsors of the Senator Paul Simon Study Abroad Program Act, which would increase the number of American students studying abroad in non-traditional locations.

After participating in Advocacy Day, White is hopeful about the future of international education. “Almost all of the staffers seemed highly interested in what we had to say, and I am excited to continue following up with them and see if they tweet support or make a floor statement.”