A USF professor for 19 years, Brindley has received numerous awards including the Outstanding Undergraduate Teaching Award and the USF President's Award for Faculty Excellence and was identified as an Honored Professor by the National Society of Collegiate Scholars. Brindley has written several articles in North American and European publications on policy and practice in higher education, has served as editor for three national/international journals, and frequently speaks at international conferences around the world. In 2014, he was elected to the Association of Public and Land-Grant Universities (APLU) Commission on International Initiatives and has spoken at national conferences of the APLU, the Association International Education Administrators, as well as the British Council Going Global conference. In 2015, he was elected APLU Executive Chair Commission on International Initiatives. 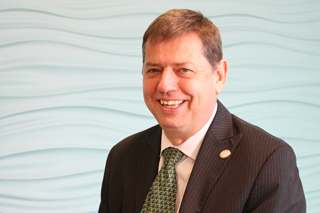 Guided by USF's commitment to being a global research university dedicated to student success, USF World's mission is to lead the university's engagement with the world by providing resources that empower the university community to function as global leaders and global stewards.

"USF World's programs and efforts are a critical component to our students' success, as well as in driving the USF System's rapidly rising international prominence," said President Judy Genshaft. "Under Dr. Brindley's leadership, our students and faculty have had unprecedented opportunities to learn, conduct research, and participate in service projects internationally, strengthening their intellectual growth as engaged global citizens. We look forward to even greater international engagement at each of our three institutions."

"USF has achieved incredible progress in strengthening global collaboration through educational and research partnerships, and innovative approaches to ensuring that USF graduates are prepared for competitive success in the global marketplace. This promotion is, in part, recognition of Dr. Brindley's commitment to developing and promoting curricular and experiences as a core element of student success," said Provost and Executive Vice President, Ralph Wilcox.

Brindley will continue to focus on USF World's goals: Global Curriculum and Student Success, Elevating the University Profile and Campus Global Awareness, Global Mobility, and Global Engagement and International Research Collaboration. He will also work to increase access to education abroad and support the infusion of global content into academic experiences and develop a more seamless experience for international students by uniting International Admissions and International Services.

"I am humbled and grateful for this opportunity to continue work at USF World, leading the university's involvement in the international arena engaging with the world and in the world," said Brindley. "USF is becoming a global campus and together we strive to increase access to education abroad opportunities and to support the infusion of global content into academic experiences."