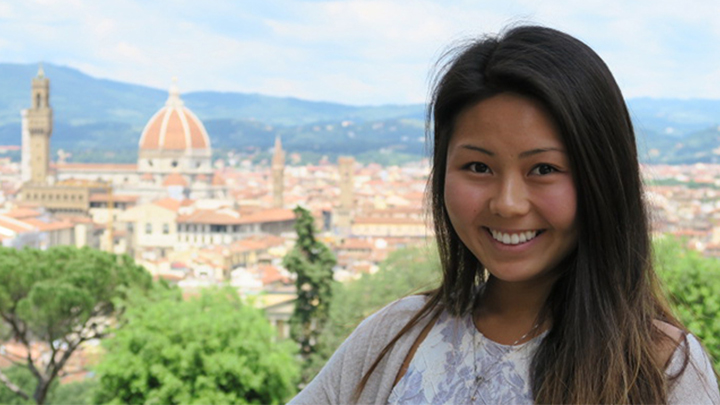 Many students dream of finding the perfect internship while at university, and many students also dream of studying abroad; Saeyoung Kim was able to combine both for an extraordinary summer experience. A rising junior studying mass communications, Kim is a member of the USF Honors College and currently interning in Florence, Italy. In addition to taking classes and exploring a new city, she is working as an international intern at Magenta Publications.

Magenta Press publishes an English-language magazine, Vista Magazine, which is where Kim's writing is published. Kim has only been living in Italy for a few weeks and the magazine has already printed three of her articles. One article she wrote on the internationally known Uffizi Art Gallery was picked up by a major Italian national daily newspaper, La Repubblica.

"Landing an international internship is no easy feat. Having a strong work ethic and vast network of connections are essential, and that's exactly what Kim has," said Dr. Janna Merrick, a professor with the USF School of Interdisciplinary Global Studies, who also teaches in Florence with the Education Abroad program.

Kim decided to intern while studying abroad because it would also serve as her Honors Undergraduate Research credit. She is required to complete a thesis for graduation and jumped at the opportunity to gain some international experience that she could put toward that thesis.

Dr. Merrick met with Kim before leaving for Italy and together they considered what internship path would be best suited. Some connections Dr. Merrick has include Gucci, a food bank and Magenta Publications. While in Florence, the two maintain daily contact, and Dr. Merrick meets twice a week with the editor of the magazine to ensure that everything is going well.

"Internships are time consuming both for the student and for the faculty member, but they typically create extremely beneficial learning environments," Dr. Merrick said. "I am really proud of her achievements. She was still a teenager when she landed this internship! She just turned 20 on June 15."

As well as writing news articles, Kim has attended functions designed for the social and political elites of Florence. She has conducted interviews with extremely well known figures in the Florence community, and she has attended invitation-only events in a number of historic venues that are not open to the public. Kim's first press conference was for the opening of an art show at Villa Bardini called the Double Portrait of Antonio and Xavier Bueno. After the press conference and art show, with the help of her director, she sought out the daughter and grandchildren on Antonio Bueno for an exclusive interview. 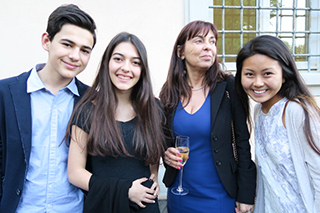 Saeyoung Kim, right, with the family of Antonio Bueno.

"My internship has consisted of many twists, turns, and surprises. I never know what to expect or what my day will consist of," said Kim. "I went to a press conference in a jewelry store on Ponte Vecchio for the release of new statement jewelry and the next thing I knew I was connecting with a world-famous blogger from Scotland. There is something to learn from everyone, it's amazing how differently we all can live and not even think about it."

In addition to Kim's outstanding work overseas, she is also a member of USF's PRSSA chapter, a student assistant in the Honor's College and an on-site mentor at Pizzo Elementary through Big Brothers Big Sisters of Tampa Bay. Because of her passion for helping others (children in particular) and her skill in writing and public relations, Kim plans on joining the Peace Corps after graduation.

"I've always loved children and would prefer a Youth in Development program through Peace Corps, but I'd enjoy any project they assign me. I am a big fan of preserving the environment as well."

To learn more about other Education Abroad programs and opportunities, click here or stop by the Gateway Office in the Marshall Student Center (MSC) 3301.