USF Leads the Nation as Top Producer of Fulbright Scholars 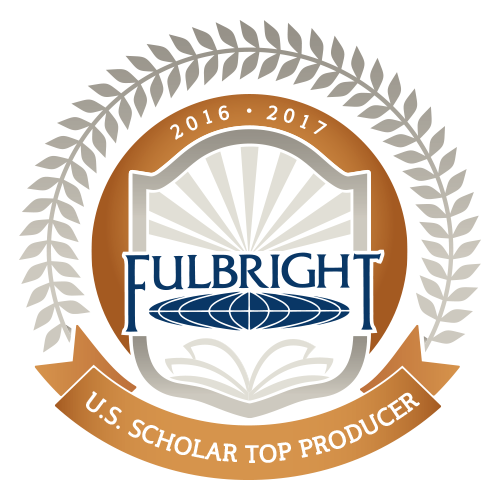 TAMPA, Fla. (Feb. 22, 2017) -- The University of South Florida (USF) is ranked as the number one producer of Fulbright Scholars in the United States for 2016-2017, according to new data released this week by the U.S. Department of State and Institute of International Education. The top-producing institutions were highlighted nationally this week by The Chronicle of Higher Education.

"Incorporating international students, faculty and programs has long been a strategic priority for the University of South Florida System. This commitment is reflected in our mission, faculty research, global engagement and campus diversity," said USF System President Judy Genshaft. "Earning this important recognition as the national leader in producing Fulbright Scholars is another example of USF's rapid growth and increasing trajectory as a top tier global research university."

Faculty who receive the highly competitive, prestigious Fulbright awards travel abroad, bringing their experiences back with them to the United States. These new perspectives are incorporated into their curriculum and research, furthering the development of USF students as global citizens.

As a global research university dedicated to student success, USF has seen growth in the number of students participating in study abroad programs. This helps all students gain valuable international perspectives.Between a combination of faculty expertise and diverse classrooms interspersed with the nearly 5,000 international students at USF, students from all academic levels at USF will develop cultural skills necessary for a professional career.

"Providing unfettered access to the highest quality global education to all academically qualified students has remained a top priority for the University of South Florida. With 40 percent of our undergraduates being Pell recipients and 30 percent the first in their family to graduate from college, access to world-class faculty enriches the academic experience in ways that cannot be measured," said Provost and Executive Vice President Ralph Wilcox.

In the USF College of Engineering, Dr. Babu Joseph was awarded a Fulbright to study renewable energy in India, while Department of Integrative Biology Assistant Professor Dr. Christina Richards is currently in France examining molecular mechanisms that contribute to how organisms respond to the environment.

Since its inception in 1946, the Fulbright Program has provided more than 370,000 participants—chosen for their academic merit and leadership potential — with the opportunity to exchange ideas and contribute to finding solutions to shared international concerns. In 2016-17, only 193 U.S. college and university faculty and administrators were awarded Fulbright grants to teach and/or conduct research. The Fulbright U.S. Scholar Program operates in over 125 countries throughout the world.

A complete list of USF's 2016-17 Fulbright Scholars can be found here.