USF Alumni Meet up in Jamaica and Around the World 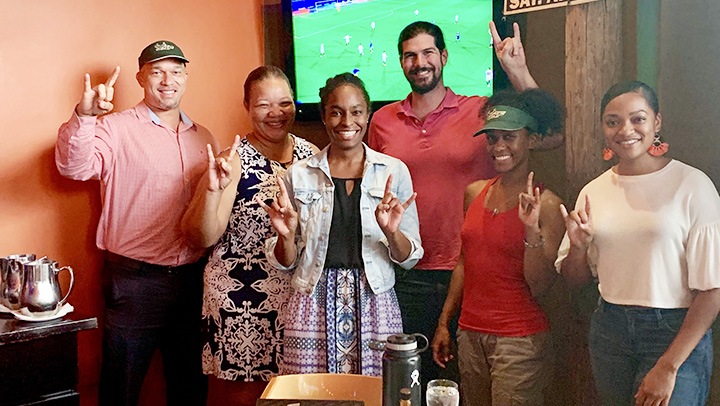 With over 75 alumni residing in Jamaica, the first-ever USF alumni event was held in the country over the summer.

Diandra Booth, a USF alum, organized the event after seeing the pride that some of her fellow classmates shared about their country.

“It's a proud and satisfying feeling to know that so many alumni, here and around the world, share similar appreciation for their time at USF,” Booth said. “The learning doesn't stop at USF, rather we are fueled to continue on a lifetime journey of success for those of us who make the most of it!”

There are over 7,000 USF alumni living outside of the U.S. in over 65 countries. Of those alumni, there are three established international chapters in London, Shanghai and Saudi Arabia.

In the past three years, events have been held in the United Kingdom, Italy, China, Switzerland Colombia, United Arab Emirates, France, Trinidad and now Jamaica. The most recent event was held in Brussels, Belgium where alumni gathered to watch the USF vs. South Carolina State football game. USF won 55-16.

Want to meet up with alumni in your own country? Update your contact information and join our LinkedIn group to connect with your fellow Bulls!