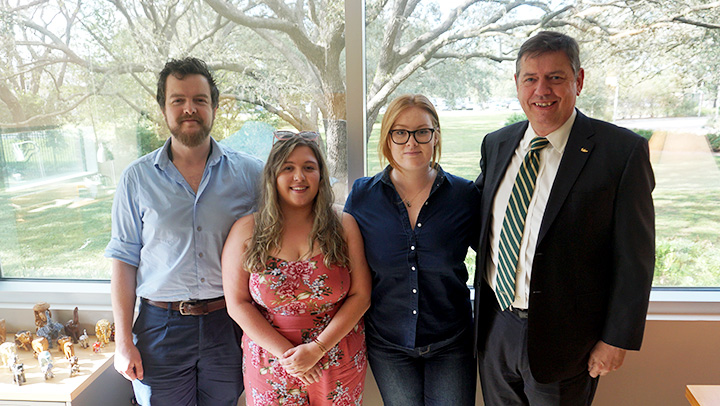 The Fulbright Postgraduate Student Award at the University of South Florida (USF), named in honor of Dr. Judy Genshaft, who served as USF System President for nearly 19 years, enables a British student to pursue a post-graduate degree at USF.

Selected as the award’s first scholar, Catherine Law is now in her fourth year at USF. Studying Criminology, Law had self-doubt before applying, but now acknowledges that anyone can qualify for the award.

“I saw the description on the website and I thought there was no way I was going to get it, people don’t even know my university,” Law, an alum of Scotland's Abertay University, said. “I just thought, I’m going to apply anyway because I’ll regret it if I don’t. Then I got the email after the interview and it was the biggest shock ever. The best thing I’ve ever done was come here.”

Four years later and Law was recently informed that she passed her second and final nine-hour qualifying comprehensive exam. She now looks ahead with just her dissertation left to complete. Researching topologies of dating violence offenders, she plans on investigate the topic on a global level.

“I’m going to analyze by region,” she said. “It’s really exciting. I’m also doing research on the death penalty and I’ve taught some classes on it, too.”

Andrew Frey, who graduated from the University of Sheffield, is in his second year of post-doctoral research at USF. Studying Cell and Molecular Biology, he recently submitted a paper about MRSA interacting with the human host.

“I’m really excited about it,” he said. “I think the technique I’m using is really cutting edge as well.”

Before coming to USF, Frey also had doubts about whether or not he was actually capable of receiving the award. 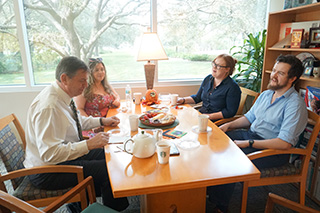 USF’s most recent scholar to travel to Tampa after graduating from Oxford Brookes University is Francesca Dunn, who is in the midst of her first semester. Dunn is completing her PhD in Applied Anthropology and will be focusing the next four years of her studies researching and developing a method of age estimation. Although her research falls under forensic anthropology, the focus is on living-beings, which is not considered common. Because of this, Dunn believes that the award is for anyone, whether they believe so or not.

“If you’ve read anything about the award or Fulbright scholars, then you know it’s a very diverse group,” Dunn said. “I don’t think there is anyone that wouldn’t fit in this group who is interested in challenging ideas or expanding their mind.”

The partnership program between the U.K. and USF started four years ago and covers nine disciplines, all of which qualify for an $18,000 stipend per 9-month academic year, including full tuition waiver.

Named after Dr. Genshaft, USF System Vice President Dr. Roger Brindley finds that through this award, her legacy continues because of her passion and drive to further USF as a global university.

“She believes in Fulbright so much and it was just a natural fit to do this,” Dr. Brindley said. “When she became president almost 20 years ago, USF was just beginning its journey. She put us on a trajectory and we’ve been flying ever since.”