The University of South Florida Is a Top Producer of Fulbright U.S. Scholars for the 6th Consecutive Year 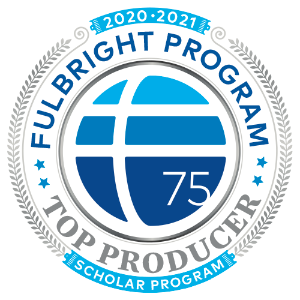 TAMPA, Fla. (Feb. 22, 2021) -- The University of South Florida is proud to be included on the list of U.S. colleges and universities that produced the most 2020-2021 Fulbright U.S. Scholars. Each year the U.S. Department of State’s Bureau of Education and Cultural Affairs (ECA) announces the top producing institutions for the Fulbright Program, the U.S. government's flagship international educational exchange program. The Chronicle of Higher Education publishes the lists annually.

Nine scholars from the University of South Florida (USF) were awarded Fulbright awards for 2020-2021, making this the 6th time in as many years that USF was recognized as a top producer in the nation. In 2016 and 2018, USF held the number one spot as a producer of Fulbright scholars. The USF Faculty Fulbright Advisor, Dr. Darlene DeMarie, Associate Professor, Department of Educational Psychology, Educational, and Psychological Studies, College of Education is proud to work with our outstanding USF faculty. Dr. DeMarie commented, "2020-2021 was a year to remember and every Fulbright Scholar chosen should feel especially proud of this honor." Dr. DeMarie works as part of the globally focused USF World, to create workshops and advise university faculty, administrators and staff on successful application to the Fulbright programs. Additional information and resources at USF are available on our website.

"We are delighted to see that the colleges and universities we are honoring as 2020-2021 Fulbrught Top Producing Institutions reflect the geographic and institutional diversity of higher education in the United States," said Mary Kirk, Director of the Office of Academic Exchange Programs in the U.S. Department of State's Bureau of Educational and Cultural Affairs. "In supporting their faculty and administrators who pursue Fulbright awards, these institutions benefit from new viewpoints from abroad and new international collaborations, which often lead to discoveries and breakthroughs that have a global impact. Fulbright U.S. Scholars benefit professionally throughout their career by expanding the scope and reach of their research, bringing a global perspective to their teaching, and receiving the professional recognition that comes with being named a Fulbright Scholar."

The Fulbright Program was created to increase mutual understanding between the people of the United States and the people of other countries. Fulbright is the world’s largest and most diverse international educational exchange program. The primary source of funding for the Fulbright Program is an annual appropriation made by the U.S. Congress to the U.S. Department of State’s Bureau of Educational and Cultural Affairs.

2021 marks the 75th Anniversary of the Fulbright Program. Celebrations throughout the year will highlight the impressive accomplishments and legacy of the program and its alumni over its first 75 years, both in the United States and around the world. A dedicated 75th anniversary website (www.fulbright75.org) will be updated throughout 2021 to showcase Fulbright alumni, partner countries, and anniversary events. The University of South Florida will be celebrating our Fulbright Programs on April 9, 2021 with a full day of workshops and quest speakers highlighting the success of our Fulbright programs and the impact they have had on our university. Information on this event can be found here.

Since its inception in 1946, over 400,000 people from all backgrounds recent university graduates, teachers, scientists and researchers, artists, and more have participated in the Fulbright Program and returned with an expanded worldview, a deep appreciation for their host country and its people, and a new network of colleagues and friends. Fulbright alumni have become heads of state, judges, ambassadors, cabinet ministers, CEOs, and university presidents, as well as leading journalists, artists, scientists, and teachers. They include 60 Nobel Laureates, 88 Pulitzer Prize winners, 75 MacArthur Fellows, and thousands of leaders across the private, public and non-profit sectors.

Fulbright is active in more than 160 countries worldwide and partners with participating
governments, host institutions, corporations, and foundations in foreign countries and in
the United States. Many of these organizations also provide direct and indirect support.
ECA sponsors the Fulbright program, and several non-profit, cooperative partners implement and support the program on the Bureau's behalf. For more information about the Fulbright Program, visit eca.state.gov/fulbright.